Sharing the Story of Ukraine Through Music

USUF joins musicians to use song to educate, inspire, and raise funds in support of Ukraine 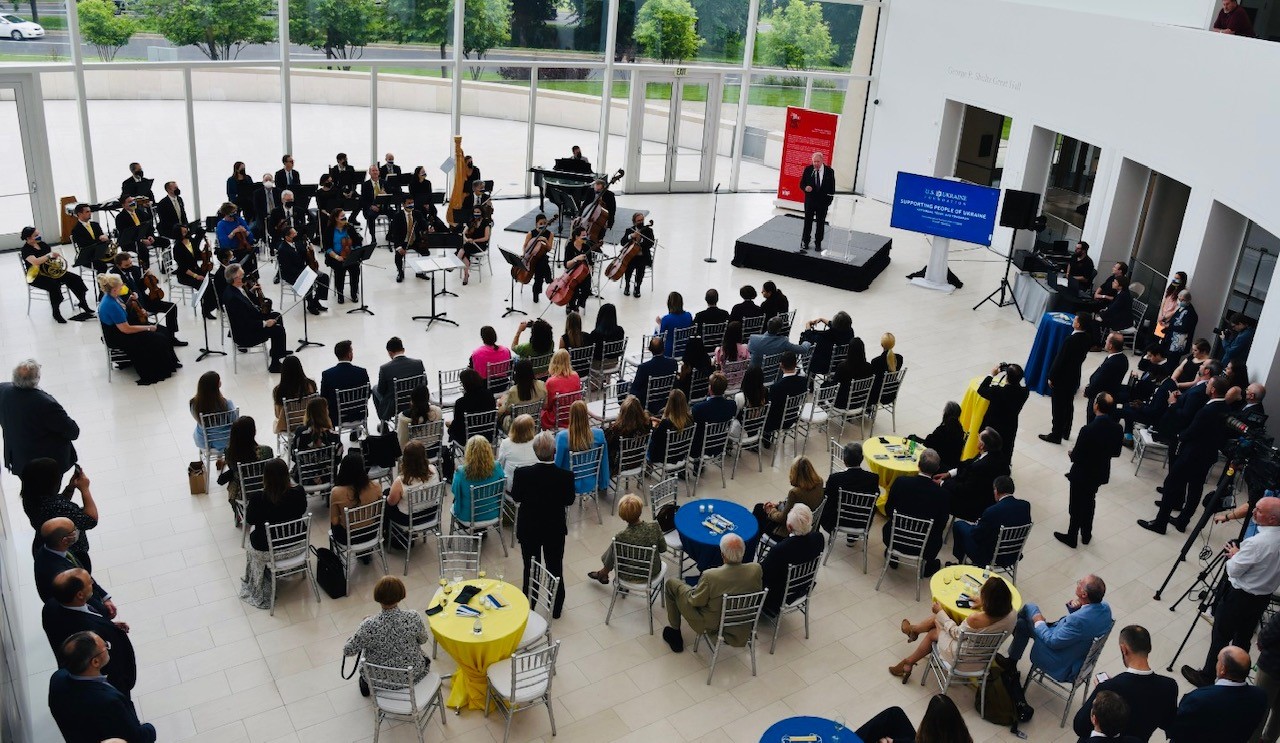 On February 24th, Russia launched its full-scale war on the sovereignty, culture, history, and people of Ukraine. Since then, the people of Ukraine have suffered great losses and endured great tragedy. However, they continue to maintain their defenses, their identity, and their belief in victory.

One of the greatest ways of expressing that experience with the world has been through music. BoomBox’s Andriy Khlyvnyuk covered “Ой у лузі червона калина” (“Oh, the Red Viburnum in the Meadow”)—singing while in uniform from the heart of Maidan Square in Kyiv—and moved people with the determination and resilience of Ukraine as his cover went viral on TikTok and was even covered by Pink Floyd. At the 2022 Eurovision Grand Finals, voters from across the world were inspired by the strength of Ukrainian women and mothers captured in Kalush Orchestra’s “Stefania”—and voters from across the continent catapulted the song to its clear victory. Vera Lytovchenko brought her violin with her into the bomb shelters of Ukraine, distracted neighbors and their children from the devastating rhythms of blasts above, and demonstrated the bright hope of the people of Ukraine in the middle of war. Every day, Ukrainian musical stars put on concerts and events for their homeland. And they are not alone—in response, artists from abroad have joined the chorus—as demonstrated by this global remix inspired by Khlyvnyuk. Musicians of all styles and from all countries every day used their unique gifts to educate, inspire, and raise funds in support of Ukraine.

It is our honor to join them. Yesterday, today, and tomorrow.

On April 29th, Ukrainian-American band Gogol Bordello released a benefit cover of The Pogues’ “If I Should Fall from Grace with God” to support the U.S.-Ukraine Foundation’s efforts. The powerful lyrics capture the deep resistance and independent spirit of the people of Ukraine, and the combined Ukrainian and American history of the band mirrors the deep support of the United States for Ukraine. We are honored to channel all proceeds from the cover to our humanitarian support of Ukraine. The main cover video already has over eleven thousand views and can be viewed here.

On May 5th, we partnered with Law Rocks and the talented musician-lawyers of Washington D.C. to host a battle-of-the-bands-style concert for Ukraine. From sponsorship, ticket-sales, and band contributions, this musical demonstration of solidarity helps to support projects like Ukraine AirLIFT, through which we deliver life-saving medical supplies to hospitals in Ukraine.

On May 17th, we joined with Eurovision National Finalist Roxolana at the Hotel Zena in Washington D.C. Thanks to proceeds from the event, a new operating table was purchased for Zaporuka, which cares for Ukrainian children facing serious diseases. Due to Russia’s ongoing war in Ukraine, hospitals are facing immense new loads, and those with non-war-related injuries and illnesses also face greater challenges to getting quality care. Thus, providing for quality care is critically important. In addition to the financial support, Roxolana shared updates and melodies from Ukraine, forging a still greater tie between the people of the United States and the people of Ukraine. The event was also highly symbolic, a movement to “Take Back Z” from its Russian military perversion—hosted at Hotel Zena in support of Zaporuka.

On May 18, we “Unite[d] for Ukraine” through music at a concert of the world-renowned Washington National Opera Orchestra. The U.S.-Ukraine Foundation and Chef Jose Andres’ World Central Kitchen jointly coordinated the concert, USUF BlueCheck Co-Founder Live Schreiber hosted, and senior members of the Diplomatic Corps, Administration, Congress, and supporters of Ukraine from all spheres attended. We were especially honored to have three Verkhovna Rada deputies in attendance and to have Ambassador Oksana Markarova speak at the event. During the concert, an American orchestra proudly played songs from Ukraine. As the music swirled through the US Institute of Peace, we called for an end to Russia’s war in Ukraine.

Moreover, among our BlueCheck partners, we are proud to include the Lviv Symphony Orchestra. By day, the orchestra continues to perform and support the endurance of the Ukrainian orchestral tradition. By night, the orchestra members pack humanitarian supplies for redistribution throughout Ukraine. In place of seating for an audience, the orchestra now features an aid collection station. In the Lviv Orchestra, musicians provide both spiritual and physical support to their countrymen.

In the future we look forward to continuing this musical tradition of support. Please raise your voices with ours on June 16th for a live-streamed international concert featuring musicians including Jamala, Ruslana, Pink Floyd, AJR, Pat McGee Band, Dorofeeva, and Crash Test Dummies. Actors Liev Schreiber and Pej Vahdat, Ukrainian-born multimedia artist Janina Pedan and other celebrities from the U.S., Ukraine and other countries across the world will also make appearances. The “World Unite for Ukraine” event stream will begin on streaming platform Mandolin at 8 p.m. ET on June 16, 2022. It will also be available on-demand for at least 24 hours after the event. Please go here to learn more and consider making a contribution to support the people of Ukraine. Corporate sponsorships are also available. All funds raised will go toward food and shelter for displaced Ukrainians, medical supplies, and essential goods and services, including mental health support.

At the “World Unite for Ukraine” concert and beyond, we will continue to use music in support and expression of the spirit of Ukraine, and we hope you will join us. After all, as First Lady Olena Zelenska told us via USUF’s new friend of Ukraine at Ukraine House Davos, “music is accompanying Ukrainians everywhere and always…[it is] part of the heart and soul of the Ukrainian people.” Music is a key medium by which to share the “so many stories that Ukrainians are telling.”