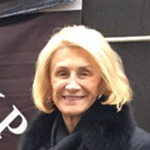 Halyna Traversa is a retired attorney and former general counsel of Rexam Beverage Can Americas. Prior to assuming that position, she was senior international counsel at both Abbott Laboratories and Motorola, during which time she worked on international business transactions, including cross-border joint ventures, in countries including Ukraine. As a member of the board of Friends of Chernobyl Centers, U.S., she organized two medical shipments to a hospital east of the Chernobyl Zone. As an active member of the Ukrainian National Women’s League of America, in 2019 she curated the first ever Holodomor exhibit to be held in a Holocaust Museum in North America.