Kickoff event of Ukraine in Washington & Beyond 2022 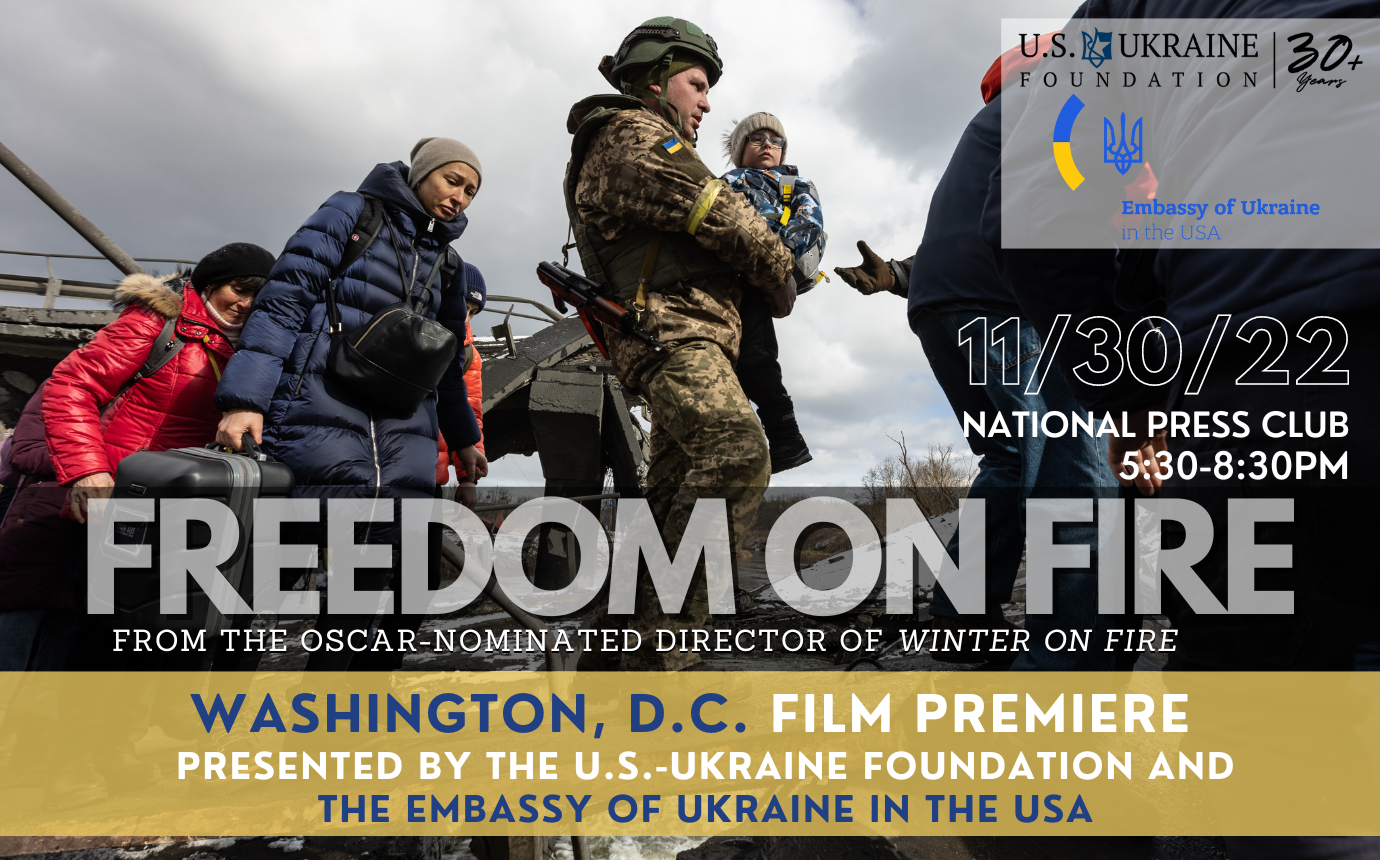 We are pleased to announce that we will kick off our Ukraine in Washington & Beyond 2022 series with a screening of the Washington, D.C. premiere of Evgeny Afineevsky's new documentary film Freedom on Fire: Ukraine's Fight for Freedom.

The panel will be moderated by Hollie McKay, a war crimes investigator, author, and journalist who formerly worked for Fox News. She has just returned from reporting in Ukraine.

You can purchase a ticket for $50 (or $25 for students) OR bring any new children's winter clothing item to send to Ukraine. For the latter option, use the code WINTERCLOTHING at checkout. Reserve your ticket here.

Evgeny Afineevsky has dedicated Freedom on Fire to "all journalists, filmmakers, and members of the press who have been killed and who are risking their lives today to shine a light on the stories and images of different conflicts for the world to see.”

During the film premiere, we will honor the eight journalists who have been killed in Ukraine since February 24, 2022.

Freedom on Fire is the sequel to Afineevsky's Academy Award- and Emmy-nominated 2015 documentary Winter on Fire: Ukraine's Fight for Freedom, which documented Euromaidan Revolution.

The documentary offers a sweeping look at a humanitarian crisis, amplifying the views of children, mothers, soldiers, doctors, artists, volunteers, clergymen, and journalists who are transformed while witnessing ceaseless destruction and bloodshed. Featuring narration from Oscar-winning Dame Helen Mirren, Freedom on Fire is a saga of resilience that challenges the international community to oppose tyranny together.

Documentarian Evgeny Mikhailovich Afineevsky was born in the Russian city of Kazan when it was part of the former U.S.S.R. Since childhood, he has dreamed of a world with less violence and more acceptance.

While making Winter on Fire: Ukraine's Fight for Freedom (2015), he realized that he could imbue his art with activism. That film helped galvanize people in Venezuela, Nicaragua, Hong Kong and Lebanon to demonstrate against oppressive dictatorships. His next work, Cries from Syria (2017), opened hearts and minds—audience members in various countries inundated Afineevsky with questions about how they could aid innocents who have long been trapped in the Syrian Civil War. After earning Pope Francis’ trust for Francesco (2020), he joined the pontiff on a globe-trotting tour to alleviate division through love and kindness. A continuation of Winter on Fire called Freedom on Fire: Ukraine's Fight for Freedom premiered as an Official Selection at the 2022 Venice Film Festival. Tracing his four-title arc from Winter on Fire to Freedom on Fire, shared themes emerge such as humanity’s capacity for good and evil, mortality and heroism.