What does "leader of the free world" mean?

Pelosi rejects Zelensky's calls to 'close the sky' over Ukraine 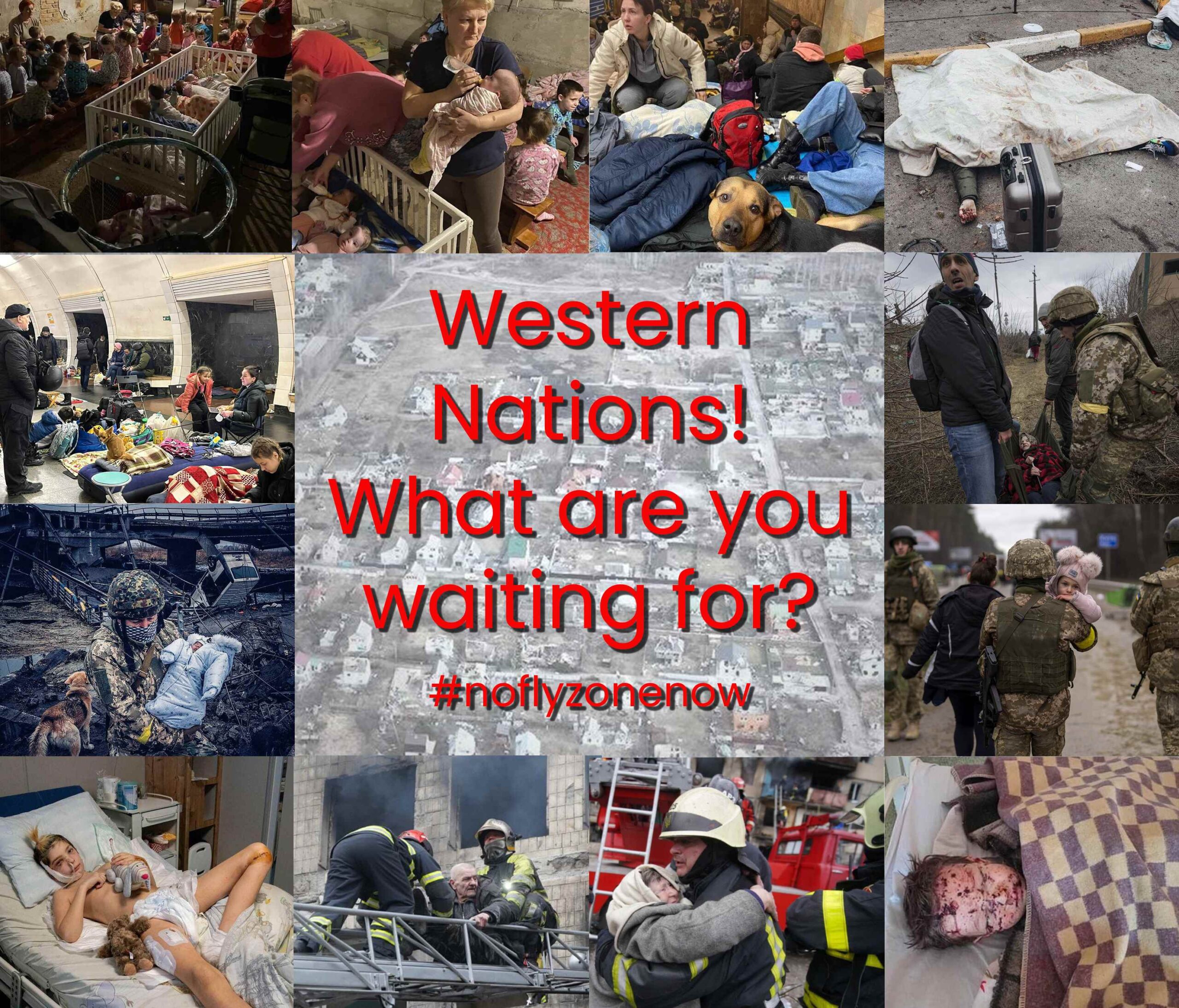 Then, when Zelenskyy did renew his request for a no-fly zone his host rejected the request immediately.

Pelosi rejects Zelensky's calls to 'close the sky' over Ukraine

Speaker Nancy Pelosi (D-Calif.) on Thursday amplified her opposition to the idea of sending U.S. or NATO forces into Ukraine to help the embattled country repel Russian airstrikes.

A more direct Western intervention to create a no-fly zone over Ukraine has been the foremost request of Ukrainian President Volodymyr Zelensky as he scrambles to secure more international help amid mounting civilian casualties. Zelensky's latest plea came Wednesday, when he addressed Congress virtually and implored lawmakers to help his forces "close the sky."

The idea has been roundly rejected by President Biden and other Western leaders. Biden in particular has been quick to warn that such help would necessarily pit U.S. and NATO troops against Russian forces — and launch a third world war in the process. [The now the well-worn escalation argument addressed further below. RAM]

It was that message of unity — and unified strategy — that Pelosi stressed on Thursday.

"It is not an Article 5 situation," she added, referring to the fact that Ukraine is not a member of NATO. "We are, however, prepared to supply Ukraine with very sophisticated equipment." [The well-worn if you are not in NATO we send you support but watch the atrocities from the sidelines argument. RAM]

In Wednesday's speech, which Zelensky delivered virtually to hundreds of senators and House members assembled in a Capitol auditorium, the Ukrainian president pled with Congress and Biden to "do more" to help his country repel Russia's military forces.

His message sought to appeal to the American public, framing the conflict as a global fight between freedom and tyranny, good and evil.

"We're fighting for the values of Europe and the world," he said. [It certainly shouldn’t take the President of Ukraine to point this out. It can’t be much more obvious to anyone and everyone. RAM]

Zelensky returned again and again to the theme of the importance of establishing air superiority — or at least keeping Ukraine's airspace a contested battleground to prevent Russian forces from roaming freely. The theme emerged in his references to Pearl Harbor, "when your sky was black from the planes attacking you," and the terrorist attacks of 9/11, "when innocent people were attacked, attacked from air."

"Is this a lot to ask for, to create a no-fly zone over Ukraine to save people? Is this too much to ask, humanitarian no-fly zone, something that Russia would not be able to terrorize our free cities?" he asked lawmakers.

Even so, he also seemed to realize going in that the answer would be no. With that in mind, he offered a concession: "If this is too much to ask, we offer an alternative."

Zelensky then rattled off a series of weapon systems he said would help Ukrainian forces combat Russian aircraft, including anti-aircraft missiles — supplies Biden said would be granted in an announcement shortly after Zelensky's speech. [Some but not all. RAM]

Pelosi, who spoke with Zelensky last week and has also spoken several times with her Ukrainian counterpart, said Zelensky's plea was perfectly appropriate. But Ukrainian leaders already "know" the limits of NATO's involvement, she added. [With war crimes being committed in front of global audience the President of Ukraine is supposed to accept a “no” and move on? I don’t think so. And his on-going push has been and is being supported by many including former top United States military commanders. Because “no” keeps being said doesn’t make it the right answer. RAM]

"What he wants is a result. He wants a result that says, ... 'If you are not going to give us air cover with your own personnel, we need air cover or we need equipment to affect air cover,'" Pelosi said.

"'If it's not going to be affected by what I'm asking for, then this is another way we can get that done.'"

The primary argument put forward against the establishment of a non-fly zone is that it would lead to an escalation of the war and a direct confrontation between the United States and/or NATO and Russia and “World War III”.

A comparison of fundamental military policies regarding Ukraine.

Basic unwavering United States policy in the face of atrocities is to avoid escalation.  Russia’s corresponding policy is one of scorched earth escalation until the Ukraine and the people of Ukraine are destroyed.

How did we get to our American position? Is Washington’s bottom line that if Putin is determined to have Ukraine it will be his and we will punish him for taking it and think we will stop him from encroaching into NATO territory?

How did we come to our “escalation” hard line?

What is the history of occasions for escalation?

1. Berlin Airlift.  The Soviet Union cut off ground access to Berlin. Some cautioned that breaking the Soviet barrier could start WWIII. It didn’t. The United States flew thousands of missions across East Germany and into Berlin. There were crashes and other incidents but no wider war.

2. In Korea the United States fought the Chinese and MiGs piloted by Soviets. The fight stayed in Korea.

3. Soviets put down uprisings in East Germany (1953), Hungary (1956) and Czechoslovakia (1968). The United States supported the rebellions and took refugees. No wider war.

4. Many proxy wars between Israel and Soviet clients in the Middle East. No expanded war.

5. Berlin Wall went up. We drew the line with tanks yards apart. No wider war.

6. Soviets set up shop in Cuba. The United States demanded the removal of nuclear missiles. The missiles left but the Soviets stayed. Soviets morphed into Russians only and they are still in Cuba today. No war.

7. We hold Taiwan. Lots of noise but no war with China.

8. Vietnam. The Chinese, Soviets and Warsaw Pact supply anything and everything and even sent ships into Haiphong Harbor. They supplied planes, SAMs and even manned SAM sights. They acted up all over the US with spies and revolutionaries. No war with the Soviet Union or China.

9. Soviets invaded Afghanistan and we supplied the Taliban. United States weapons killed a lot of Soviet soldiers. No war.

10.The United States killed Cubans in Grenada. No war.

12. United States fought in Afghanistan and radical Muslims were supported by Russia, China and Pakistan. We even flew into Pakistan, a nuclear power, no wider war.

Sure, each conflict is unique and in some of these examples there was no direct U.S.- Soviet or Russian contact but these were all highly contested situations that stayed within certain parameters.

Talk of World War III really comes across and a justification spin to avoid action.

There have been two world wars. In each case countries all across the globe were combatants; thus “world” war. If Putin’s war against Ukraine, the United States and NATO were to become a live fire situation involving the U.S. and/or NATO the world would not be involved. It would be a regional war won quickly by the allies.

Yet here we are on the sidelines watching atrocities day-after-day and squirming that letting Polish MiGs go the Ukraine would be too dangerous, that a no-fly zone would risk a dangerous escalation.

Words matter. What does “leader of the free world” mean?

Talk of World War III really comes across and a justification spin to avoid action.

There have been two world wars. In each case countries all across the globe were combatants; thus “world” war. If Putin’s war against Ukraine, the United States and NATO were to become a live fire situation involving the U.S. and/or NATO the world would not be involved. It would be a regional war won quickly by the allies.

Yet here we are on the sidelines watching atrocities day-after-day and squirming that letting Polish MiGs go the Ukraine would be too dangerous, that a no-fly zone would risk a dangerous escalation.

Words matter. What does “leader of the free world” mean?

Please note the introductory comments, the parenthetical insertions and the closing commentary are all by Mr. McConnell's and do not necessarily represent the views of the U.S.-Ukraine Foundation or the Friends of Ukraine Network.