US Mission reports atrocities to OSCE

Dear colleagues, war crimes do not merely happen. They are committed. They are intentional. 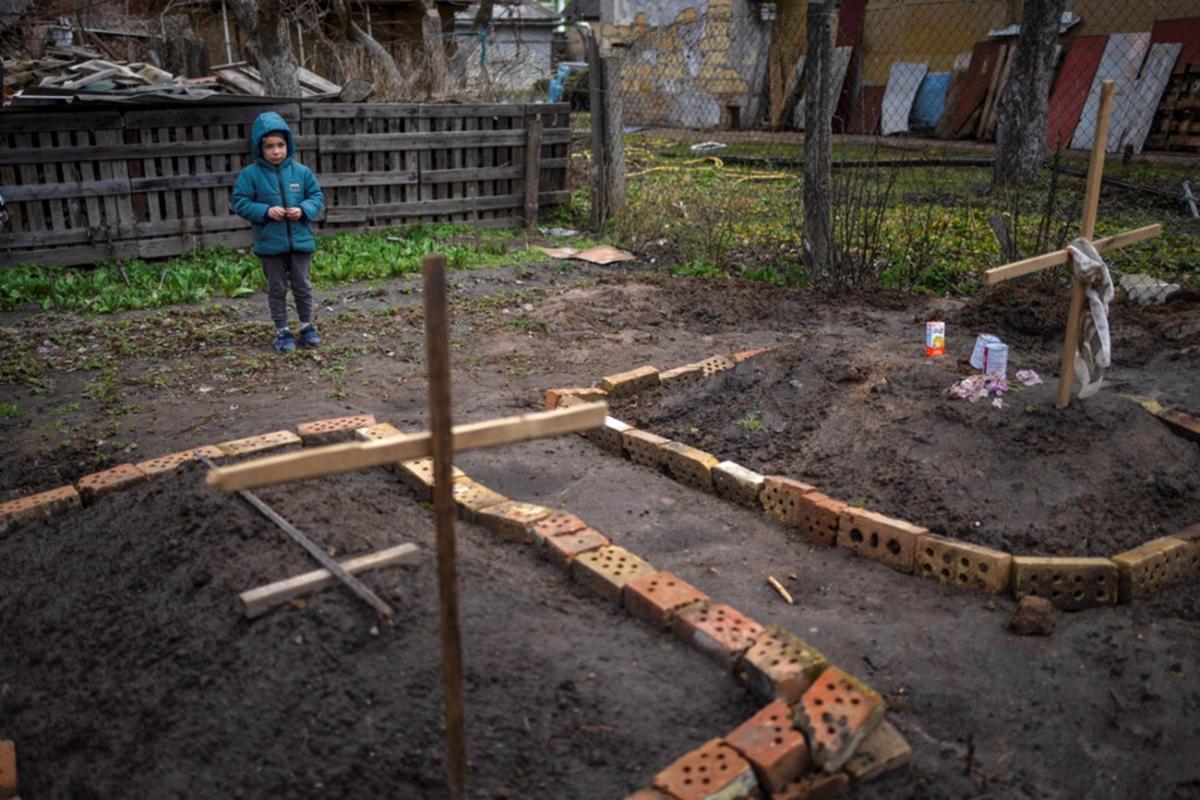 In the courtyard of their house, Vlad Tanyuk, 6, looks at the grave of his mother Ira Tanyuk, who died in Bucha, on the outskirts of Kyiv, Ukraine (AP Photo/Rodrigo Abd)

‍
The Friends of Ukraine Network intends to do its part to have the reports of the United States to the OSCE meetings spread broadly as possible - to people in our government and the public.

We all see the media reports and see videos and reports via the Internet but when Ambassador Michael Carpenter speaks in Vienna it is very much worthwhile seeing is take on the pure evil the Russians are displaying with their demonic behavior.

As delivered by Ambassador Michael Carpenter to the Special Permanent Council, Vienna. April 5, 2022

In the face of such appalling evil as the world has witnessed in the last few days, I would like to recall the words of the great American writer John Steinbeck, who wrote:

“I believe that there is one story in the world, and only one, that has frightened and inspired us…Humans are caught — in their lives, in their thoughts, in their hungers and ambitions, in their avarice and cruelty, and in their kindness and generosity too — in a net of good and evil… I think this is the only story we have and that it occurs on all levels of feeling and intelligence…There is no other story. A man, after he has brushed off the dust and chips of his life, will have left only the hard, clean questions: Was it good or was it evil?”

Was it good or was it evil? That is a question we may ask of the townsfolk of Bucha. Of their lives in this quiet and tranquil suburb.

And it is a question that we may ask of their executioners, who rode into town with their hungers and ambitions, their avarice and their cruelty, leaving behind the enduring stain of evil.

Dear colleagues, war crimes do not merely happen. They are committed. They are intentional. And as all the participating States represented here know well, the conduct of war is governed by clearly defined rules, including rules to protect civilians from violence. These rules apply even to wars launched by a state against its neighbor without any provocation or justification. These rules are clear under international law.

Mr. Chair, the world is demanding justice following the shocking images of carnage discovered when Ukraine liberated Bucha on April 2. Video footage shows the bodies of scores of people, including families and children, lying strewn across the streets and in ruined homes of this once obscure suburb of Kyiv, some with their hands tied behind their backs. An eyewitness account tells of Russia’s forces rounding up five men on March 4, forcing them to kneel on the side of the road, pulling their t-shirts up over their heads, and then shooting them in the back of the head point blank – execution style. There are other graphic reports of rape and indiscriminate killing. The mayor of Bucha, Anatoly Fedoruk, estimates some 300 of his townspeople were shot while Russian forces held the area, with the majority dumped in a mass grave on the outskirts of town.

It’s not just in Bucha. Accounts of civilian killings in other areas that were once held by the Russian Federation correspond closely to what we are seeing in Bucha. As more areas are liberated, we are likely to encounter similar scenes of utter depravity and monstrous brutality. We continue to see credible reports that Russian forces continue to kill civilians and kidnap and kill local leaders in areas in Ukraine they hold. We are seeing credible reports of torture and civilians executed alongside their families as well as booby traps left behind by Putin’s forces to injure even more civilians.

I cannot even begin to imagine the terror that these civilians have faced and continue to endure. Imagine, just imagine, what Mariupol looks like today.

Mr. Chair, we have all watched Russia kill civilians on a daily basis. Russia’s forces have leveled entire Ukrainian cities to the ground, have hit hospitals, apartment blocks, schools, orphanages, and other buildings known to be sheltering civilians. They have shelled humanitarian corridors and there are now many reports that they have forcibly transferred the local population out of these areas held by Russia. Every single last one of these acts should be investigated and its perpetrators held to account. War crimes cannot be committed with impunity.

The callousness with which Russia’s authorities have treated the news from Bucha is also worth dwelling on briefly. As photos of bloodied civilian corpses with hands tied behind their backs emerged on Saturday, Russian MFA Spokesperson Maria Zakharova tweeted about the injustice of being turned away from a Chanel store. Russian authorities also claimed – as they have on previous occasions – that Ukraine had faked the scenes in Bucha using “crisis actors.” Eventually they settled on their favorite narrative, saying the United States had ordered the footage of atrocities in Bucha in order to frame Russia. I know I don’t need to say it, but that “claim” is both offensive and ridiculous. It brings to mind Hannah Arendt’s term the “banality of evil.”

Mr. Chair, the United States has long warned that Putin’s forces were likely to commit atrocities as part of this war of aggression. We have seen the catastrophic images of devastation from Mariupol, reports of tens of thousands abducted or deported by Russia’s forces, and shocking descriptions of rape and assault in the towns and cities the Kremlin cynically claimed Russia’s forces have “liberated.” The reports and images we have seen, including the recent terrible footage from Bucha, suggest these are not the acts of a rogue soldier or two. They are part of a broader troubling pattern of reports of atrocities. All of Russia’s forces—from the soldiers on the ground to the generals giving orders—must be held accountable for their actions.

Colleagues, as Secretary Blinken said, “We can’t become numb to this. We can’t normalize this. This is the reality of what’s going on every single day as long as Russia’s brutality against Ukraine continues. That’s why it needs to come to an end.”

Those responsible for any war crimes and other atrocities committed in Ukraine—including political and military superiors—must be held accountable. That is why, together with other participating States in this Council, we are calling for a thorough investigation of what took place in Bucha, what took place in Irpin and Hostomel, and what is taking place across Russian-held territory in Ukraine. Those responsible for acts of this nature should have no doubt that every atrocity they commit will be exposed, and the international community will hold them to account. These acts must stop, and they must stop now.

Mr. Chair, the evil that has transpired in Bucha will forever live in infamy. Let us never forget it.