A fragment of a Tochka-U missile lies on the ground following an attack at the railway station in Kramatorsk, Ukraine, April 8. PHOTO: ANDRIY ANDRIYENKO/ASSOCIATED PRESS 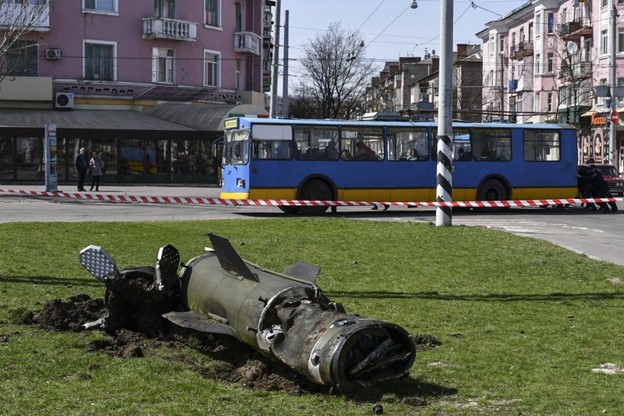 A fragment of a Tochka-U missile lies on the ground following an attack at the railway station in Kramatorsk, Ukraine, April 8. PHOTO: ANDRIY ANDRIYENKO/ASSOCIATED PRESS

*Please note, the introductory comments and parenthetical comments are Mr. McConnell's and do not necessarily represent the views of the U.S.-Ukraine Foundation or the Friends of Ukraine Network.*

Putin and the Russian Federation have and are making a mockery of the United Nations and the numerous treaties, agreements, and institutions supposedly created to preserve global order. In his op-ed in Friday’s The Wall Street Journal Ukraine’s Minister of Defense points out what too many seem willing to ignore. In his op-ed Minister Reznikov moves from the embarrassment that the United Nations has become and into the war and what is needed – as he must. But while we must respond to Ukraine’s immediate needs immediately, we should not ignore the money-sucking failure that is the U.N. It is time for fixing.

‍The U.N. Is an Enabler of Russian War Crimes

A permanent member of the Security Council invaded Ukraine. The free world needs to fight back.

The world was horrified by the mass killing of innocent civilians in Bucha. Russian soldiers violated all existing rules and laws of war, raping children and torturing women and men, shooting them execution style. Similar crimes were committed in Kharkiv, Mariupol, Chernihiv and in Kramatorsk, where Russian forces fired a Tochka-U ballistic missile on a railway station filled with 4,000 civilians, mostly women and children.

Among the casualties of Russia’s war on Ukraine has been the postwar system of global order and security. Russia has done everything that the international security institutions were created to prevent. How can the United Nations Security Council, on which Moscow has a permanent seat, live up to its mission to maintain peace? What kind of security and cooperation is possible on the Continent when one participating state of the Organization for Cooperation and Security in Europe has attacked another and killed thousands of civilians? These organizations have failed. Like the League of Nations before them, they must be replaced by a new and more effective set of international institutions capable of serving the interests of all countries, not only those of the great powers.

The architecture of this new system should be based on Ukraine’s experience. In 1994 we gave up the world’s third-largest nuclear arsenal, hoping that the signatures of world leaders on a document meant something. But in April 2008, Germany and France blocked Ukraine’s accession to the North Atlantic Treaty Organization. The Kremlin got the message. In August 2008 Russia invaded Georgia and the world turned a blind eye. In 2014 Russia attacked Ukraine and the world decided not to intervene. Now Russian bombs are erasing our cities from the earth and the world has been unable to stop it.

All this could have been prevented. Had the West imposed preventive sanctions on Russia and provided Kyiv with a sufficient number of defensive weapons—primarily air and missile defense systems—tens of thousands of Ukrainians would still be alive today.

The Western response to the invasion has been too slow. As President Volodymyr Zelensky has said, the global response to a crisis of this sort should be immediate, within 24 hours, not after weeks or months. Any aggressor must face irreversible punishment through a mechanism of preventive measures—so called deferred sanctions that can be approved in peacetime and take effect automatically. [Zelenskyy and Reznikov are being far too kind. Yes, under the circumstances that existed at the end of the day on February 24 the American and western response should have been immediate. But those circumstances should never have existed. In Washington three straight Administrations were simply awful in their responses to Putin’s demonic aggression in Ukraine – failures. Yes, I know and acknowledge millions and now billions in aid but most never designed or considered to put Ukraine in a position to defeat Russia. Don’t argue Obama’s slow, incremental and weak sanctions, or Trump’s finally providing javelins, or Biden’s this-and-that until the people of Ukraine fought back making a war out of Putin’s invasion. It doesn’t accomplish anything now to discuss the failures of the past, but it should motivate Washington to accelerate its new-found interest to deliver weapons that can allow Ukraine to defeat Putin and – please – get past its previous knee-jerk “noes” to prove critical weapons needed now – including aircraft! RAM]

Russia’s aggression against Ukraine has created almost four million refugees. We are on the brink of a global food crisis that could destabilize Africa and the Middle East. Until Russia is stopped, the crisis will only grow, pulling in neighbors and contributing to the collapse of economies. [Until Russia is defeated! RAM]

We always hear the echoes of the past in the present. I’ve never liked traitors or cockroaches. Even when I was a child, both filled me with disgust. Eventually I came to terms with cockroaches and no longer take offense at their existence, but my feelings for traitors haven’t changed. This is the core of who I am, and of many people around me these days. You can’t go back on your word. You can’t run when your country needs you. You can’t betray your friends.

I make dozens of calls every day, communicating with friends and colleagues from different countries. I really want to believe that everyone I speak with has values that they won’t betray under any circumstances. If you consider friendship one of those values, and you consider yourself a friend of Ukraine, please realize that time is running out. We need your help, and we need it now.

Primarily we need heavy weapons to defend and liberate Russian-occupied territories. I know that these weapons can be sourced quickly from different countries. All that’s needed is the will to do so. If you give us these weapons, you will show the world that you are not afraid to confront evil. We also need a total global embargo on Russian oil and gas. We need real sanctions against Russia’s banking system and trade. [Where there is a will – there is a way. Time to prove we want Ukraine to win this war. RAM]

If you give us all this, Russian invaders will be gone from Ukraine in a few months. If you don’t, the war will drag on, and the terrorist state of the Russian Federation will destroy the reputations of global leaders and encourage other rogues to test their strength. The flames of the war can spread to other countries at any moment because Vladimir Putin won’t stop in Ukraine.

A Ukrainian victory is the only outcome that will force Russia to rethink its strategy of aggression. We can do it. We have already proved our bravery. We just need the tools. Once the job is done we can get down to the important business of building a new world security architecture free from the structural defects of the past.