People in Ukraine are Dying and Putin - despite everything - is winning 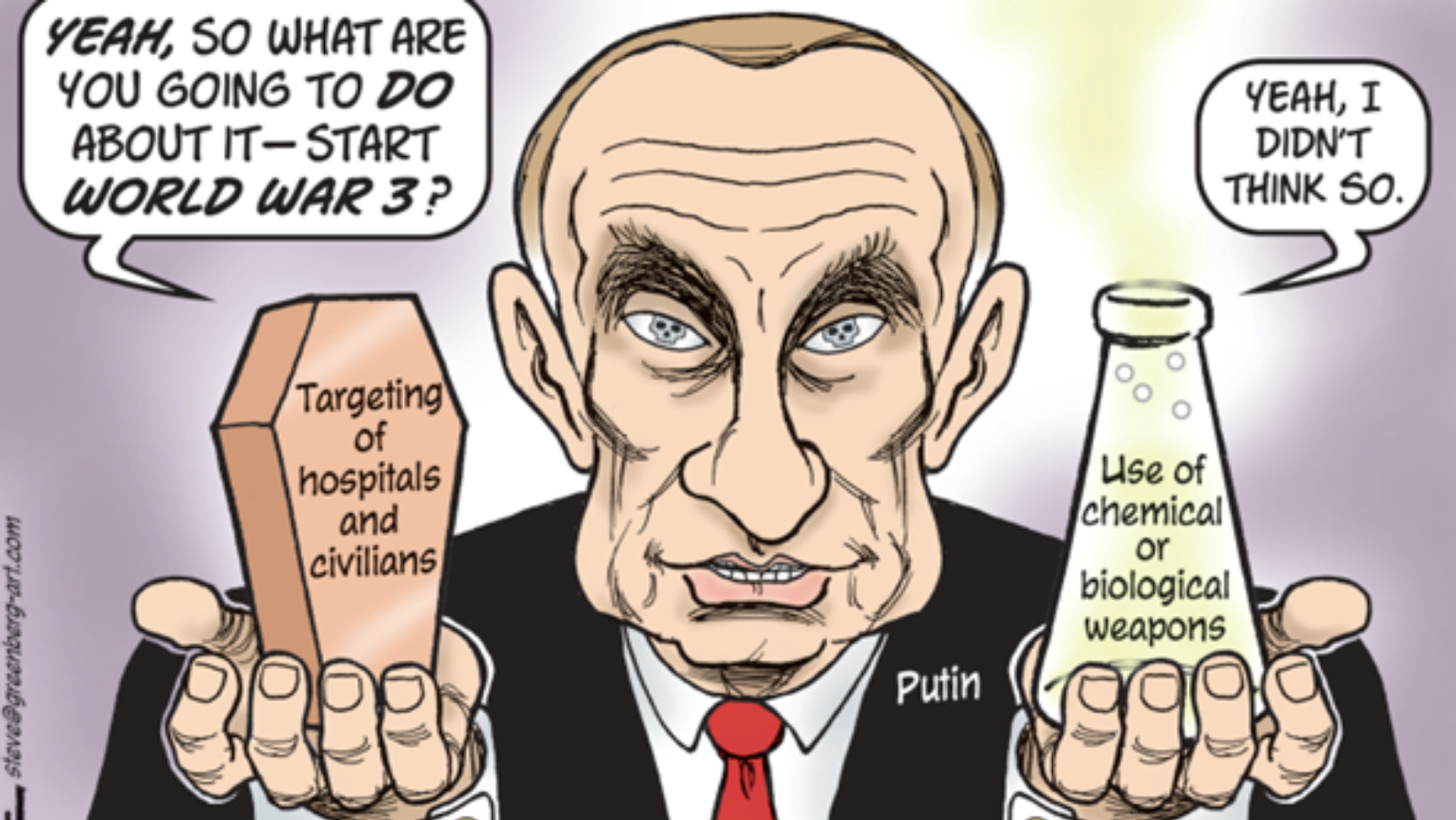 I apologize - I do not want to overburden inboxes - I withhold a lot of items I deem important and relevant in this time of war. But I pass this one on even though it is the second message of the day.

The article below, just published by The Hill, I distribute because the case made by Debra Cagan needs as broad a distribution and possible.

I did insert in the article one parenthetical comment because in the hypersensitive American political world in which we live I hear now and again from readers from all sides of the political spectrum suggesting a bias has appeared going one way or another – sometimes from multiple sides in regard to the same email.

And I insert one cartoon illustrating Debra’s point.

Why Ukrainians are still dying (and Russia is winning)

Russian President Putin had to do something to stop the hemorrhaging. His preposterous description of Ukrainians as Nazis and murderers was losing ground. As his callous and indiscriminate attacks on civilians who kept “inconveniently” getting in the way turned the tide against him, Putin had to try another approach. So, instead of denying the bloodthirsty carnage he had unleashed against a neighbor simply for not being Russia, he decided to embrace it and revel in the onslaught.

He threatened the world watching the atrocities unfolding in front of them that they too could — and would — fall prey to the Russian killing machine if they dared to cross his ever-growing list of red lines.

And when Putin was not convinced this would be enough to ward off additional interference by those not sufficiently cowed, he did what any ruthless thug in his position would: He flashed the nuclear card, implying he might play it.

A flash of the card was all it really took (and an embarrassingly short wait) to goad the professional hand-wringers in the EU and NATO — with aid from the echo chamber of Western media — into a full and strident whine that any military action that could remotely be perceived as upsetting Putin would lead to World War III.

This broad public acceptance that Putin is unstable and unpredictable and therefore might do the unthinkable has resulted in episodically tortuous military support for Ukraine — from the type and number of weapons provided, to the intelligence and countermeasures essential for defending that sovereign nation.

This self-imposed constriction, arising out of an inability to stand up to this 21st Century tyrant, has resulted in far more destruction and greater Russian victory than would have occurred had support been forthcoming from the start.

In 2014 the Obama administration wouldn’t even consider providing guns and ammunition to Ukraine to defend itself against the outrageous incursion and annexation by Russia. Back then, the din from those who parroted the nonsense that supply of any defensive weapons to Ukraine would lead to World War III were too numerous to count. Yet — miraculously — once weapons and training started to flow to Ukraine, Russia did not declare war on NATO.

Even with this proof in hand, President Biden, leader of the free world, delayed assisting Ukraine with what it needed to defend itself against further Russian depredation — until pictures started streaming in from the streets of Ukraine of civilians being destroyed like the buildings they used to inhabit. [The fact is Ukraine has been inconvenient and worse for the last three administrations – certainly including the one between Obama and Biden – Mr. Trump’s. There have been and are currently excellent officials who have served and are serving in these administrations. But the final decisions come from the top. And there none of the administrations have seemed to grasp the unique and critical position of Ukraine to our own national security interests and even broader geopolitical stability. RAM]

Even now, that ubiquitous word “escalation” rolls from the lips of western leaders as they continue to defend the indefensible.

This adopted Russian narrative, like so many others, is without evidence. We trot out guesses from so-called intelligence experts that the provision of fighter jets from a NATO ally to Ukraine would be escalatory… but rocket launchers are not?

Where is that line in the sand, and who drew it?

Putin’s statements on nuclear weapons deployment and use has caused a veritable tizzy, as if Russia is the only nuclear super power that matters. Decades of deterrence orthodoxy and strategy have apparently gone out the window.

Meanwhile, the doomsayers quote Russian threats — and each other — with a sort of tortured logic that suggests only demonstrable U.S. weakness — and that of its allies — will stop Putin from inflicting unthinkable harm to those outside Ukraine.

As government officials and the commentariat trip over themselves pointing to potential horrors of what a new nuclear deployment in Belarus might mean, they forget that Russia has had tactical nuclear weapons in Kaliningrad for decades, and that strategic piece of Russian geography shares a border with NATO Allies Lithuania and Poland. Odd how those deployments are rarely equated with WWIII.

What is perhaps even more puzzling is the need to spend enormous amounts of time articulating in great detail what the West will not do to help Ukraine. Every speech, press conference and international gathering is riddled with examples of what the west will not do, overshadowing what it will and has done.

There was a time when great leaders did not provide enemies with a blueprint of what would be permissible while invading and destroying a country — but now, apparently, conveying to your enemy that killing and maiming will have little repercussion is okay.

Yes, there are domestic audiences for these pronouncements, but being a great leader means explaining why — and not just capitulating to the rank isolationists whose compatriots in the last century washed their hands of the death of millions.

Do we honestly believe that is the best legacy for this century as well?

Contrary to the end-of-the-world proclamations, the news for Chicken Little is the only way this sky is falling is if we let it.

Diplomacy means more than sitting at a table thinking of ways to reward a murderous aggressor so that he might stop.

We must use every channel to let the Russians know that provision of arms and equipment — including aircraft — to a country under attack is a right protected by Article 51 of the UN Charter. It also means informing Russia — not asking for permission — that we will protect air corridors so that civilians can move without getting bombarded or blown up with land mines.

It means conveying in the strongest terms that there will not be direct conflict between us, so long as Russia does not precipitate it. That means being very clear that there are rules of engagement for every conflict around the world, and that so-called “accidents” (when Russian indiscriminate bombing and missile strikes go off-target into NATO countries, as will be increasingly likely) will not be tolerated.

But what if the truth is far more sinister than this oft-repeated and baseless fear of “escalation”?

What if some of these leaders have decided that despite the obvious failure of their so-called diplomatic initiatives and blanket sanctions (which have not slowed Putin’s depravity), they have neither the courage nor the desire to get further involved.

What if they are more content to watch from the sidelines as the slaughter of innocents grows daily, breathing a quiet sigh of relief that it’s only Ukraine and not them?

In the annals of historical sacrifices, the death knell of an entire country in an era in which everything supposedly was in place to prevent exactly this, the West’s self-inflicted wounds will likely be permanent.

Debra Cagan is the Distinguished Energy Fellow at the Transatlantic Leadership Network and worked as a career State Department diplomat and Defense Department official from the Reagan to Trump administrations, including serving as deputy assistant secretary of defense for coalition, peacekeeping, humanitarian and disaster relief where she headed coalition operations for Iraq and Afghanistan; senior director of European, Russian and Eurasian security issues; special adviser for strategic and nuclear policy for Europe; and senior adviser to U.S. and NATO military officials. Debra is also a member of the U.S.-Ukraine Foundation's Friends of Ukraine Network

Please note the introductory comments, the parenthetical insertion and the cartoon were all by Mr. McConnell's and do not necessarily represent the views of the U.S.-Ukraine Foundation or the Friends of Ukraine Network.