Patriarch Kirill, Weaponizing Russian Orthodoxy as a Tool of Propaganda 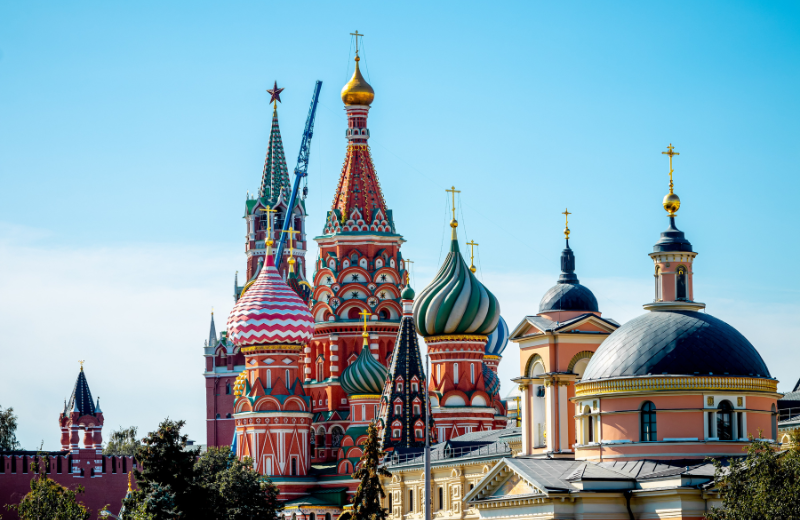 “Forgiveness without justice is surrender and weakness. Therefore, forgiveness must be accompanied by the indispensable preservation of the right to stand on the side of light…we have entered into a struggle that has not a physical, but a metaphysical meaning.” -Patriarch Kirill 1 of Moscow and all Rus’

On March 06, 2022, a large congregation stood at Moscow’s Cathedral of Christ the Savior awaiting a sermon from their celebrant. This was the last Sunday before their Great Lent, but what undoubtedly weighed more heavily on the minds of many was Russia’s so-called “special operation” in Ukraine which had commenced less than two weeks prior.

Vladimir Mikhailovich Gundyayev, known religiously as Patriarch Kirill, is a former KGB agent and de facto head of the Russian Orthodox Church (ROC). He began his discourse with a rather uplifting, if not cliche, pre-Lenten message reminding listeners that spring, the season of new life, will soon begin, bringing with it the Easter season, which should likewise be remembered as a period of spiritual rebirth. The Christian Faith, after all, is a faith that stands against death and destruction, and which “demands that people follow God’s divine laws in order to live, so as not to die, in this world, or in the next.”

It was with this statement that the bishop made the political connection that would render the sermon infamous throughout the West. Gundyayev continued with a statement that this particular spring is overshadowed by the “deteriorating political situation in Donbas.” Hardly a controversial statement, had he stopped there.  But he continued to the crux of his argument:

“For eight years there have been attempts to destroy what exists in the Donbas. And in the Donbas there is a rejection, a fundamental rejection of the so-called values that are offered today by those who claim to be a world power. Today there is such a test of loyalty to this power, a kind of pass to…the world of excessive consumption, the world of visible ‘freedom.’ Do you know what this test is? The test is very simple and at the same time terrible—it's a gay pride parade. The requirements for many to hold a gay pride parade are a test of loyalty to the most powerful world; and we know that if people or countries reject these demands, then they do not enter that world, they become strangers to it.”

The war, according to Gundyayev, is not a matter of two political bodies claiming the same territory, nor is it even about “Ukrainian nazis” per se; this is a clear battle between good and evil. Gay parades, consumerism, and budding democracy (which may opt for a liberal regime) lay on one side, and tradition, virtue, and godliness on the other. If those in Donbas who have fought courageously against the “predations” of the secular Ukrainian government for 8 years need assistance, it follows that Russia would be remiss not to fight in their defense. After all, other world powers would be unlikely to help, as pro-Russian forces in Donbas have made themselves “strangers to [the world]” as a result of their fortitude. Thus, the sermon suddenly became a bizarre discourse on the merits of Putinism as a force perpetuating Orthodox social teaching, or, at the very least, a virtuous force against the spread of oppressive secularism past Russia’s western border. Of course, Vladimir Putin himself was never named in the sermon, though there is hardly any reason to assume he would be. As Patriarch Kirill would frame it, the two governments involved are hardly relevant—this is a war against evil powers and principalities.

This is not the Patriarch’s first time inserting himself into the political sphere; Gundyayev has long been infamous in the West. Throughout his 13.5 years as incumbent Patriarch of Moscow and all Rus’, the bishop has supported Putin through several political controversies. In 2012, Patriarch Kirill named Putin a “miracle of God” who almost single-handedly saved Russia from “this crooked twist of our history” (presumably referring to Westernization overseen by Boris Yeltsin), and referred to opposition as mere “ear-piercing shrieks” which do not represent the majority sentiment in Russia.

That same year, at the very cathedral in which he would give the aforementioned sermon ten years later, Russian feminist pop-punk band Pussy Riot performed an irreverent piece within the sanctuary calling on the Virgin Mary to “chase Putin out” and containing a number of other inflammatory statements regarding politics and the ROC itself. Following this event, the group gained international recognition as well as a two-year prison sentence for the three women involved. Kirill for his part stated that Pussy Riot was committing acts of blasphemy on behalf of the devil which should not go unpunished. In 2019, Gundyayev claimed that the Antichrist heads the world wide web and that he has utilized our gadgets which we fill with personal information in order to turn such knowledge against users at his time of arrival.

Patriarch Kirill has proven time and again that he believes freedom and free speech stand as barriers against Russia’s religious duty which must be destroyed gradually. Gundyayev was a major supporter of the Jehovah’s Witness ban of 2017, claiming that they do not and should not be allowed the same privileged place in society as holders of the true Faith (Russian Orthodoxy), and their “aggressive proselytizing” poses a threat to that Faith which must be neutralized.

Kirill, who in the past has praised the Ukrainian Orthodox Church (UOC) for its loyalty to the Russian Church, was faced with major backlash as the Council of the Ukrainian Orthodox Church met and decided to renounce that loyalty and declare independence from the Russian Church in late May of 2022. The council cited Gundyayev’s support for the war as a pretext for the decision and pointed to his blatant disregard for the commandment “thou shalt not kill” as evidence of his lack of authority as a spiritual leader rather than a political talking head. This development may have come as a major upset for the Patriarch of Moscow, though his initial reaction could be considered somewhat measured. The Patriarch said he understood the UOC’s decision from a pastoral perspective, though he followed that statement with an assurance that “spirits of malice” are looking to disrupt unity between the Russian and Ukrainian Orthodox Churches, but they will ultimately fail.

Where, one may wonder, is the fire and brimstone messaging Kirill ordinarily employs in his preaching against anti-Russian forces? The move by the Council of the UOC was a direct affront to his authority, and, presumably, a sin, as the clergy overtly rejected what Kirill believes to be the governing body of the one true Faith. Surely this warrants a greater reaction from the bishop than Pussy Riot, and surely this poses a greater threat to the ROC than the door-to-door preaching of Jehovah’s Witnesses.

We must ask, then, what is the underlying philosophy of the Putinist Patriarch? Why is it that this religious leader and Putin, a governmental authority, have remained such close allies throughout their shared periods of incumbency?

I would postulate that the two former KGB agents in question share a pre-Soviet Russian Imperialist vision for the Rus’ which necessitates both shared borders and shared faith. Regardless of how Russia may exploit this fact as a tool of propaganda, it is not debatable that Ukraine and Russia share a massive amount of history (Kyiv, notably, playing the role of capital and holiest city rather than Moscow the majority of the time). Patriarch Kirill can trace his office and in fact his entire sect of Eastern Orthodoxy to the 10th-century conversion of Volodymyr the Great, Grand Prince of Kyiv. Kyiv was thereafter not only known as the capital of Russian Orthodoxy, but as the capital of a great and growing Empire, until the fall of Kyivan Rus' in 1242.  Subsequent Mongol rule would see East Slavic people fractured into various states; this marks the origin of separate modern-day Ukraine, Belarus, and Russia.

Patriarch Kirill and President Putin, for their part, choose not to acknowledge that specific historical reality, both blaming Vladimir I. Lenin and the Bolsheviks for manufacturing a separate Ukraine which was united with, but distinct from, Russia in the Soviet Union. This of course is a supremely dishonest reading of history that ignores centuries of Ukrainian nationalism, a separate language, the name “Ukraine” being used to refer to the area as early as the 12th century, and countless other historical details. However, Putin, in his belief that Lenin upset the proper status quo with the Communist Revolution, of course looks to reconstruct what was lost and, like his tsar-predecessors, is motivated by a quest for empire, a feature of which is a unified Ukraine and Russia. Patriarch Kirill’s motives add a religious layer to the matter.

One may question why Patriarch Kirill’s religious objectives push him to so vigorously support Putin, who, though friendly to the Church, is a dubious figure at best to prop up as some moral ideal or religious icon. The situation begins to make sense, however, when one considers that Putin may be a means to an end for the Patriarch. Kirill, when expressing with tranquil certainty that those attempting to sow division between the Ukrainian and Russian Orthodox Churches will ultimately fail, reveals that he is operating under a notion of manifest destiny which makes the religious union of the countries a divine guarantee.

The core similarity between Putin and Gundyayev is their belief that governmental power ought to be wielded as a means to their desired ends. Naturally, then, Putin, as a “miracle of God,” may be a necessary force in God’s plan for ROC and UOC unity. If Ukraine were to continue down the path of liberalization which brings with it the free exchange of ideas and, inevitably, practices that conflict with Orthodox moral teachings (e.g., pride parades), Orthodoxy would suffer, in Gundyayev’s eyes, likely irreparable losses. The only possible measure, then, which would prevent Ukraine from joining the ranks of the demonic West would be Russian intervention. If, of course, Russia controls all territory in question, her government could ensure religious dissidence and diversity are kept minimal, and that holy destiny will have been realized. The aforementioned split announced by the UOC is a small, likely temporary price to pay for the greater goal. Thus it would seem that Patriarch Kirill’s religious vision and Putin’s lust for territorial gain must operate in tandem, as unnatural as the alliance initially appears.

Nor is Patriarch Kirill of Moscow and all Rus’ likely to alter his message. He has continued to tout the president as the great savior of Russian virtue while turning a blind eye to Putin’s credible murder allegations, extramarital affairs (and likely children), dishonesty and corruption, targeting of civilians in war, waging of multiple unjust wars altogether, and myriad additional anti-Christian behaviors. If he truly perceives that the future of his entire Church is at stake and it is his responsibility to ensure God’s exceptional plan for Russia is fulfilled, what reason does the Patriarch have to turn back now? 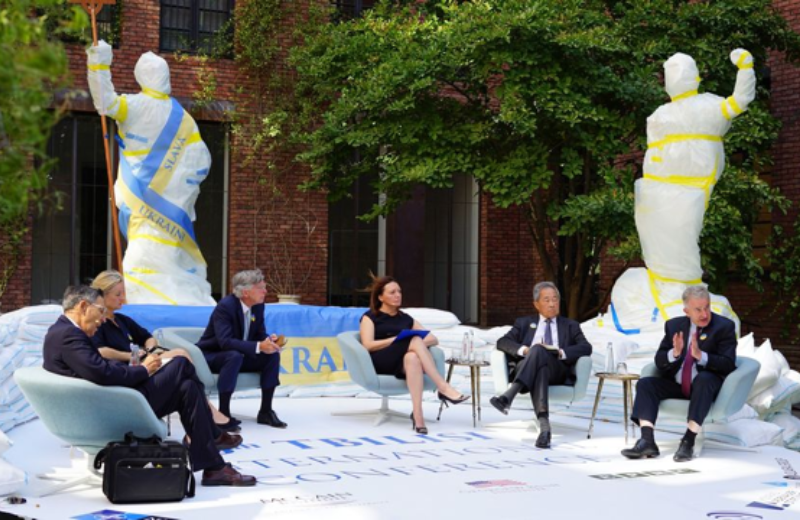 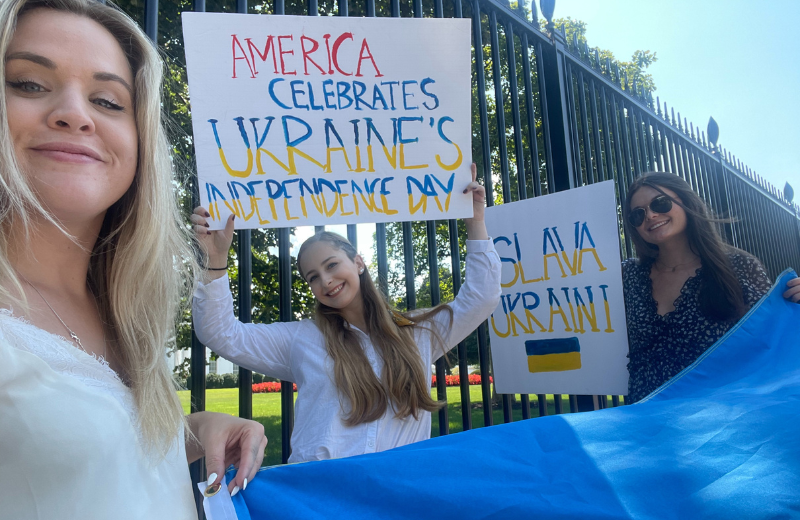 Why Should I Care About a Country That Isn't Mine?