The time is long past when this should have been done 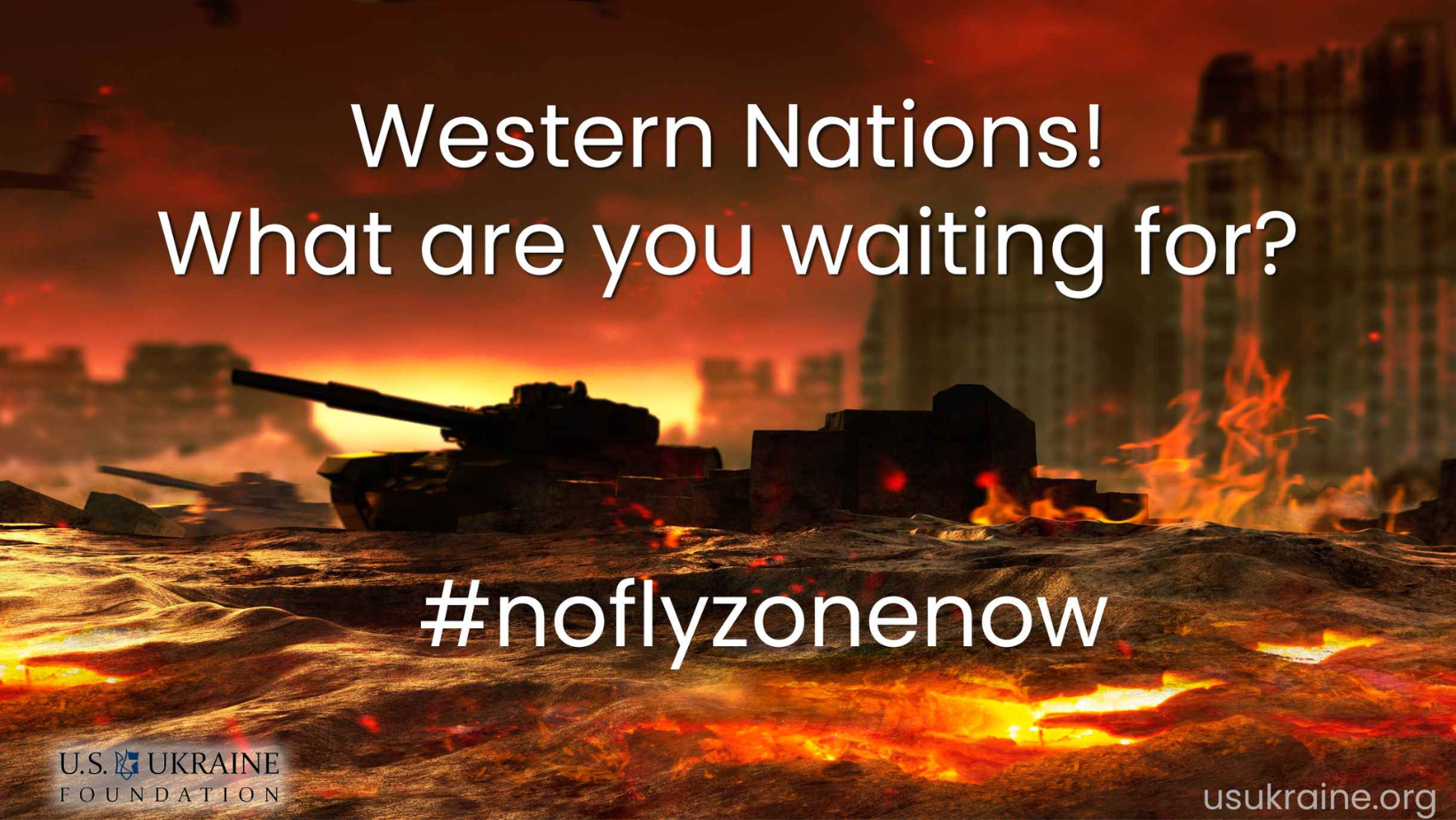 The Foreign Ministry of Ukraine has prepared a short video with a call for a no-fly zone.  The time is long past when this should have been done.

The two headline grabbers regarding what Ukraine needs and wants these last days have been fighter jets and a No-Fly Zone.

The arguments for both continue to fall on the deaf ears of officials in Washington and Europe who have misjudged Ukraine and the entire situation since 2014. And have never made the genuine commitment to Ukraine’s freedom and sovereignty.

Of course, an applaudable and not insignificant effort has been made to bring allies together and finally to rush to try to make up for lost time in aiding Ukraine. What has been done and is being done is significant but has not been enough and still fails to recognize Putin’s intentions and determination.

You can read The Wall Street Journal’s report on the MiG-29 misadventure below but remember the video appeal above and how overwhelmingly the pros of establishing a No-Fly Zone outweigh the cons.

The Pentagon on Wednesday pulled the plug on the idea of NATO members providing Soviet-built MiG-29 combat jets to Ukraine.

The about-face from earlier support of getting planes to Ukraine came after days of intense lobbying by Ukraine for such aircraft and a spat between the U.S. and Poland over how such a deal might unfold. The incident marked the first significant tension within the North Atlantic Treaty Organization as it provides support to Ukraine to fend off Russian forces.

Defense Secretary Lloyd Austin spoke to his Polish counterpart Wednesday, and “stressed we do not support the transfer of additional fighter aircraft to the Ukrainian Air Force at this time,” said Pentagon press secretary John Kirby. [Isn’t the claim that the United States is Ukraine’s greatest supporter? RAM]

The Pentagon’s move came a day after Poland stunned Washington when it said it would make its Soviet-built MiG-29 combat jets available, though to the U.S., and not directly to Ukraine. Rather than sending the planes to Ukraine, Poland suggested they first go hundreds of miles in the other direction to the Ramstein air base in Germany.

The Pentagon’s move came a day after Poland stunned Washington when it said it would make its Soviet-built MiG-29 combat jets available, though to the U.S., and not directly to Ukraine. Rather than sending the planes to Ukraine, Poland suggested they first go hundreds of miles in the other direction to the Ramstein air base in Germany.

The idea caught Washington by surprise. “I think it’s pretty clear, it doesn’t require a military expert to understand why having planes fly from a U.S. air base into a contested part of a country where there is a war is not in our interest and not in NATO interests,” White House press secretary Jen Psaki said Wednesday. [The day is coming when the United States and NATO will learn what is obvious to others – seriously aiding Ukraine and defeating Putin is in our critical national security interests. Putin is not going to stop until he is stopped and if Washington and NATO actually think Putin will stop at Ukraine (should he take it) that misconception will blow up in their faces with consequences far more serious than taking him on in Ukraine. RAM]

Soon after, the Pentagon’s Mr. Kirby called the proposal “high risk” and said it would not “significantly change the effectiveness of the Ukrainian Air Force relative to Russian capabilities.”

The spat between two close NATO allies comes as Vice President Kamala Harris heads to Poland. On the agenda: “how best to provide a variety of security assistance to Ukraine,” a senior administration official said.

Since Russia’s invasion began, NATO otherwise has largely operated in lockstep to help Ukraine fend off Russian forces, delivering weapons to the neighboring country and running reinforcement to the alliance’s eastern front to protect allies there. And NATO is starting to listen to longstanding requests from Poland and other Central European members to permanently base troops there to reinforce defenses. [When the post-war critique comes it is going to be ugly. How late the support came, how weak the commitment to Ukraine was for so long. How terribly Washington and NATO misjudged the people of Ukraine. Even now resisting doing what is required. RAM]

The issue of the planes surfaced after Ukrainian officials for weeks pleaded with Western countries to supply them weapons to help counter Russia. As Russian helicopters and fighters attacked Ukrainian cities, government officials there increasingly urged allies to provide equipment to shoot down those aircraft.

Providing combat planes in what would be the highest profile transfer of arms from the West to Ukraine began as a low-level point of discussion among European militaries. It blew into the open when European Union foreign-policy chief Josep Borrell 10 days ago made a passing reference to those conversations in public. “We are going to supply arms and even fighter jets,” he said Feb. 27.

At that point, technical discussions were ongoing, but meant to be discreet, Polish officials said. Officials were looking at whether the planes could be somehow transported across its eastern border into Ukraine, surreptitiously, to avoid the possibility of provoking a wider war that could directly involve NATO. [Discussions were on-going and now exposed. Who was responsible for contingency planning? RAM]

To some the idea was always a nonstarter. “Turning a NATO jet into something Ukrainians could fly would mean ripping out hugely complicated systems,” an American defense industry official in Poland said. Warsaw upgraded its MiGs with systems so allies could identify the planes as friendly and to communicate securely, he said, noting that some of that equipment isn’t transferred beyond the alliance and would have to be removed from the planes before handing them to the Ukrainians.

“If there were a plan to do so, this would be at least a multi-month project, even operating at warp speed,” he said.

Ukrainian pilots likely would be able to adapt to the Polish planes relatively quickly, but that doesn’t mean they would be proficient enough to take the MiGs to war, said Justin Bronk, research fellow at the Royal United Services Institute, a London think tank. “It is a question of if they could be combat effective immediately? Probably not,” he said, adding it would take weeks to reach that level of proficiency.

Still, the talks continued. [So, are these reasons a transfer wouldn’t work genuine or ass cover? RAM]

For more than a week after Mr. Borrell’s comment, Polish and American diplomats and defense officials quietly explored whether it could be done, and how. Publicly, Poland’s government issued carefully worded denials saying it wouldn’t send Polish jets into Ukraine or allow Polish airfields to be used.

Privately, they explored whether there was some creative workaround, two Polish officials said. One loosely considered idea was to transport the planes by road.

Chief among Poland’s concerns: It didn’t want to be seen as donating its jets unilaterally, but rather wanted U.S. and NATO backing for the move. That would protect it from retaliation by its historical rival, Russia. The government hoped it could keep talks quiet.

All of that changed after Ukrainian President Volodymyr Zelensky made an impassioned plea to Capitol Hill for assistance in obtaining more lethal military aid, calling for Russian-made jet fighters that Ukrainian pilots can fly among other equipment. Several U.S. lawmakers rallied around the appeal. Sen. Dick Durbin (D., Ill.), the No. 2 Senate Democrat, among others, said that the U.S. should help make possible the transfer of the aircraft.

A day later, after meeting Polish officials on Sunday, Secretary of State Antony Blinken said the U.S. had greenlighted a MiG transfer to Ukraine and was looking for ways to get Poland replacement aircraft.

Polish officials said they were blindsided by Mr. Blinken’s remarks, which they believed effectively left it up to Poland to choose between denying Ukraine the jets it wants, or to donate them—a gift Moscow might deem an act of war. The use by Ukraine of airfields in other countries would be “a very undesirable and potentially dangerous scenario,” Kremlin spokesman Dmitry Peskov said on Wednesday. [There we are once again the Kremlin threat carrying the day. RAM]

“Poland was expected to cut one third of its Air Force to please some Twitter crowd or some American pundits,” said Slawomir Debski, director of the Polish Institute of International Affairs, a think tank. “And then allies would blame us, and say that we triggered the Third World War and dragged the alliance into a war with Russia.”

By Tuesday, Polish officials had grown frustrated with mixed signals over whether the idea should be discussed so openly. Warsaw was alarmed that Poland was being pushed out alone onto a dangerous limb without U.S. backing. And it couldn’t abide a situation where the country—one of Ukraine’s biggest champions within NATO—was portrayed as the stumbling block to the planes going, a senior Polish government official said. The president’s office and representatives convened to push back, the official said. Soon after, Poland made its offer, making the planes available in return for used American aircraft. And they called on other NATO allies to free up their own MiGs.

Ms. Psaki, on Wednesday, characterized what transpired the day before as a “temporary breakdown in communication.” [There are other ways to describe it and all are embarrassing. Let us pray unity can return to the NATO allies and that they will move on establishing a No-Fly Zone. RAM]

For our own national interests, we need a No-Fly Zone and we need to get as many Stingers, Javelins, coastal batteries, ammunition, fuel and small resistance arms into Ukraine as possible as fast as possible.

The introductory comments and parenthetical comments are Mr. McConnell's and do not necessarily represent the view of the U.S.-Ukraine Foundation or the Friends of Ukraine Network (FOUN).