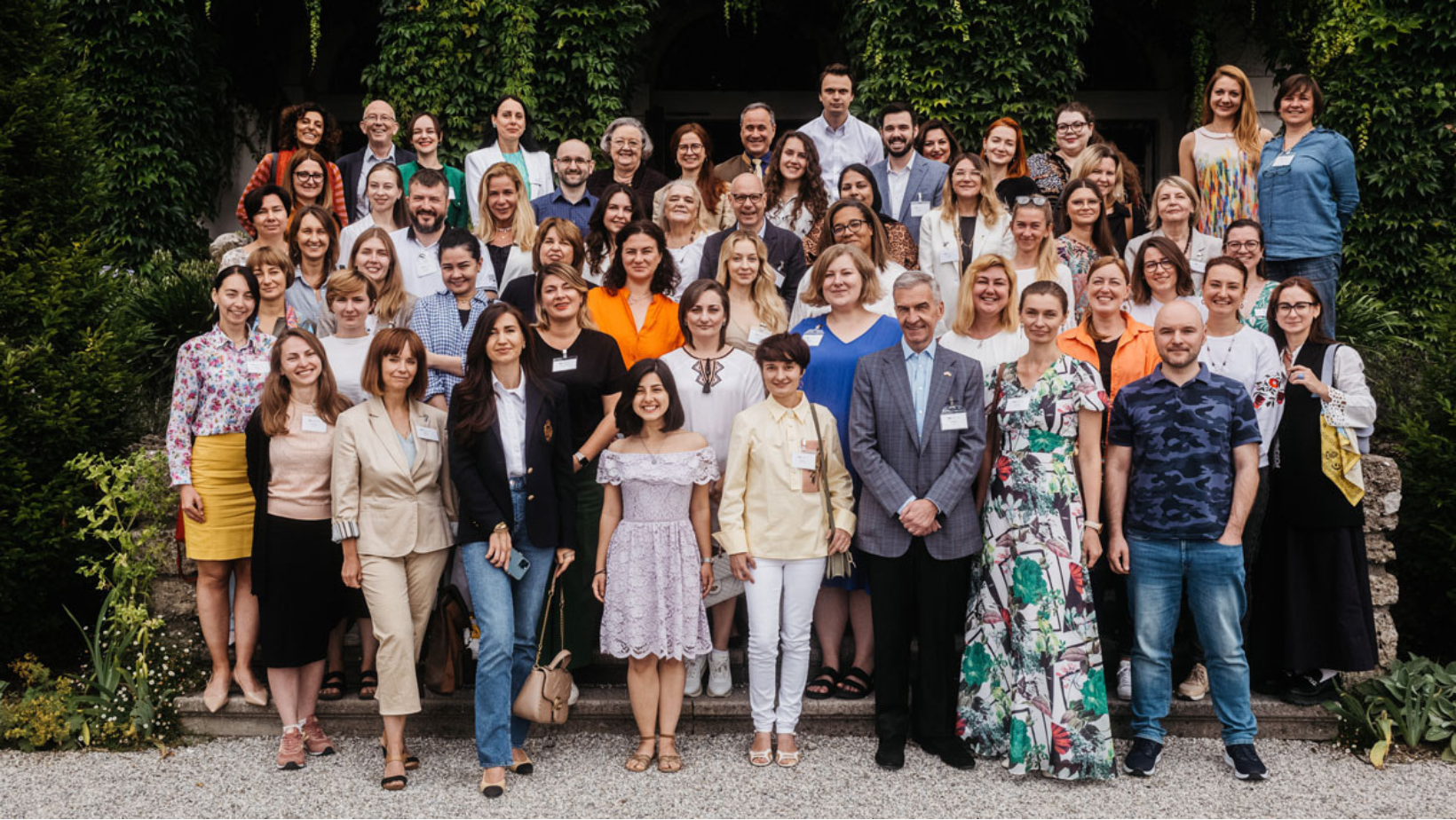 From July 11-15, the Salzburg Global Seminar held a program entitled “Connecting and Supporting Ukrainian Society in Time of War”.

Although the participating members of Ukraine’s civil society are engaged in providing for current humanitarian needs in response to Putin’s war against Ukraine, the focus of the discussions was the future: Ukraine after the war.

However, mindful that they were going back to providing for current humanitarian needs, participants concluded their statement about rebuilding Ukraine with an immediate call to action: winter is coming - livelihood needs – food water, energy, shelter, as well as housing, education, income, and jobs.

The U.S.-Ukraine Foundation is working to provide such humanitarian aid. If you would like to support the Foundation in these efforts, there is a donate link at the end of this email.

It is important to understand that the seminar was not about what others need to do for Ukraine; it was about what Ukraine and the people of Ukraine need to do to have the country they want for themselves and their posterity. The seminar was for - not about - Ukraine's civil society, but if you read the seminar's statement you can see how to help.

The program was held at the Salzburg Global Seminar’s home of Schloss Leopoldskron. If you are not familiar with this mansion, it is where The Sound of Music was made and offered refuge to many fleeing Ukrainians in February and March.

Co-hosts with Salzburg Global Seminar were the United States Institute of Peace and Britain’s  Century Trust. Don Jensen led the team from USIP and John Lotherington participated for Century Trust.

It was a fabulous retreat location for representatives of Ukrainian civil society organizations from inside and outside Ukraine to strategize and weigh options and opportunities in the post-war rebuilding of Ukraine.

Nadia McConnell, co-founder and president of the U.S.-Ukraine Foundation was one of few non-Ukrainians invited to participate. I accompanied Nadia (baggage trainee) and was gratefully included in the entire program. George Casey of Shearman & Sterling was another participant from the United States.

Few of the participants knew one another before arriving in Salzburg, but introductions were quick and easy. Most of the participants are engaged in providing humanitarian assistance now but are also involved in how and what kind of “reconstruction” will need to take place.

Nadia and I were surprised some of the participants from Ukraine recognized us but did not know from where – we were stumped.

Eventually, with the help of Myroslava Gongadze, the connection was made. A number of years ago Myroslava interviewed us for a television program about Ukraine’s gaining independence in 1991 and a number of the participants had seen that program.

It was such a great discussion bringing together so many thoughts, emotions, hopes, and goals with the undercurrent being a society based upon and adhering to a rule of law.

At the very end of this email, I provide a link to the final seminar statement, but I set out here the topic areas starting with one critical call to action:

Do not underestimate Ukrainian civil society

Ensure gender equality and the voice of women

Support people living in both occupied and de-occupied territories

Reorient the education system toward the future

Support the green, sustainable, and inclusive recovery and reconstruction of Ukraine

Ukraine’s civil society has been ahead of its government since before independence, clearly seeking, as Taras Shevchenko asked, a Ukraine with “fair and just laws." Building such a country and society was the focus of this week-long program.

However, Putin’s war was never far away. So many of the participants have phone apps that warn of missile and bomb attacks, and almost constantly during conversations, there would be a phone beeping and a participant would slip away to call home. “Oh, the strike was over a mile away from our home.” It was obvious that far more strikes were taking place than you read about in the press.

It was amazing how calmly a participant would move right back into the conversation. The lives these participants are living as they work for their country and its sovereign future!

One of the participants, Olha Lykova, is a leader of Dattalion, a fabulous group of professional women who are documenting war crimes and also helping the U.S.-Ukraine Foundation by following up on the Foundation’s humanitarian deliveries so we can show donors deliveries being effective

In the picture to the right, Olha is telling Nadia some of the challenges that Dattalion faces. In addition to the original members, they get new volunteers. But, not surprisingly, some of those volunteers come back after documenting cases of brutal Russian atrocities and say they simply cannot continue. It is one thing to read about the crimes and evil; it is another thing to live through and document what the people of Ukraine are experiencing.

The days were filled with plenary sessions and break-out discussions as well as animated dialogues during wonderful meals.

These wonderful people, each providing humanitarian services as the war continues - including dealing with the children of the war and the impact of the trauma they are experiencing, assisting people living in shelters to adapt to the reality that shelter-living will not be short-term, that there will not be homes to go back to in many cases - are planning for the future and how to build their country and society for the long term.

Of course, critical is the follow-up and building upon the Salzburg discussions and created networks. There is so much to do.

I also note that on Friday, mid-afternoon, as we were waiting for a taxi to take us to the train station for our train to Vienna, three of the young women were waiting for their respective rides to start their journeys home all by different routes.

They each hoped to get to their homes by mid-day the following Monday but thought it could be Monday night. The common thread was that when they would get to Ukraine’s border, they would pick a place and walk into Ukraine to avoid the congestion and other challenges where so many people are gathered and exposed.

As Putin’s totally unjustified and unnecessary war impacts and costs human lives, the people of Ukraine are focused on preserving their country, culture, and independence and building the Ukrainian future.

Thank yous are in order to all of the participants and certainly appreciation to Charles Ehlich and Kateryna Dzhyviriaha and the rest of the people at Salzburg Global Seminar for their efforts in putting together and managing the event.

I believe it is well worth presenting the participants and at least some of their affiliations.

and Europe, US Institute of Peace

﻿Director, Russia and Europe, US Institute of Peace

Head of the Board, Democracy Development Center

Teaching Assistant Member of the Board. The University of Manchester Professional Government of Ukraine

Special Assistant to the President and CEO, United States Institute of Peace

Researcher, Institute of Higher Education of the National Academy of Education Sciences

Head of Board, Institute of Public Diplomacy

Managing Director, Research Center for the History of Transformations (RECET)

Advisor to the Parliamentary Committee on Ukraine’s Integration into the EU,

To access the full Salzburg Statement of Ukrainian Civil Society:

This article was written by Mr. McConnell is reporting on the July conference in Salzburg.

Robert A. McConnell is a co-founder of the U.S.-Ukraine Foundation and Coordinator of External Relations for the Foundation’s Friends of Ukraine Network. He is Principal of R.A. McConnell and Associates. Previously, he has served as head of the Government Advocacy Practice at Gibson, Dunn & Crutcher; Vice President – Washington for CBS, Inc; and Assistant Attorney General in the Department of Justice during the Reagan Administration. rmcconnell@usukraine.org

Support for Ukraine Weakening Among Republicans?