The human and humanitarian tragedy is growing every day, every hour 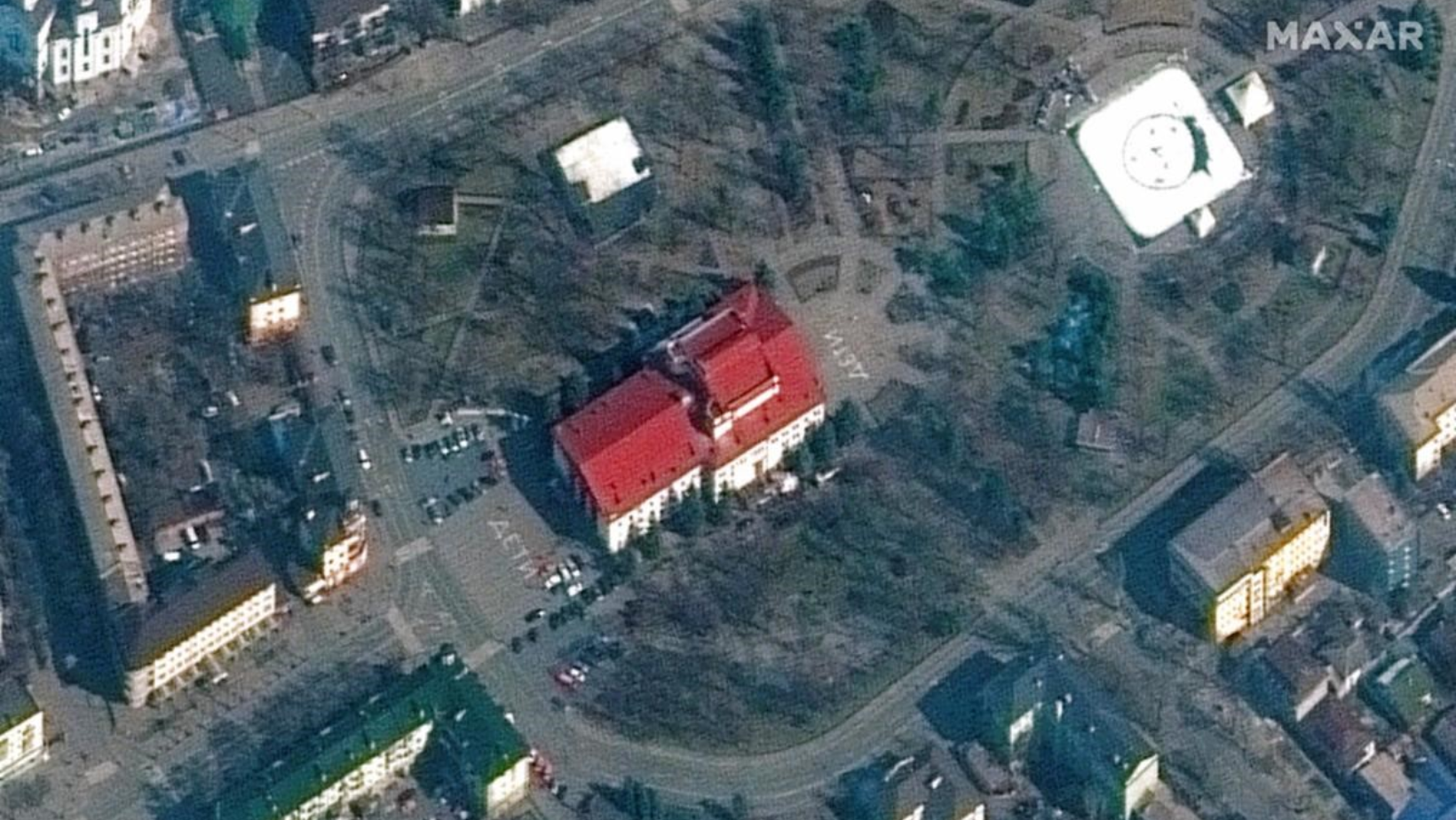 This satellite image shows the Mariupol Drama Theater in Mariupol, Ukraine on Monday, March 14, 2022. Ukrainian officials say Russian forces destroyed the theater in the city of Mariupol where hundreds of people were sheltering. This satellite imagery showed the word “children” had been written in front and back of the Theater [Keep the fact that the theater was clearly identified as housing children when you read below Russian Foreign Minister Lavrov's comments about the bombing. The list of war criminals grows. RAM]

[I note that one of the Friends of Ukraine Networks' Emergency Recommendations for U.S. Assistance to Ukraine in December mentioned a much broader circulation of the OSCE Ambassador's Updates to the Permanent Council in Vienna.

In keeping with that recommendation here we present Ambassador Michael Carpenter's remarks delivered earlier today in Vienna. And we are proud to remind that Carpenter was an active member of the FOUN between his periods of service to our government.]

U.S. Mission to the OSCE

As delivered by Ambassador Michael Carpenter
to the Permanent Council, Vienna
March 17, 2022

Today is the 22nd day of President Putin’s unprovoked war on Ukraine. I want to start by taking a moment to pay tribute to the heroic journalists risking their lives every day to tell the truth about this hideous war. A truth that Russia desperately seeks to hide. I note with sadness the death on March 13 of American journalist Brent Renaud, who was killed near Irpin while making a documentary on the plight of refugees for TIME Studios. On March 14, FOX News cameraman Pierre Zakrzewski was killed by incoming fire near Horenka.

Oleksandra Kurshynova, a Ukrainian, was also killed in this attack and Benjamin Hall, another journalist for FOX, was injured. At least two other Ukrainian journalists have been reported killed in these last three weeks: Evgeny Sakun, who died in Russia’s attack on the Kyiv TV tower, and Viktor Dudar, who was killed near Mykolaiv.

Let us remember their courage and pay homage to all the other victims of this barbaric war.

The human and humanitarian tragedy is growing every day, every hour. We’ve all heard the alarming tallies of refugees, internally displaced, hungry, sick, homeless, killed, and wounded. But the numbers don’t do justice to the horror and grief of what is happening inside Ukraine. We need to process these raw human costs in a different way.

Mr. Chair, last week I and many other colleagues spoke in this Council about the horrific situation in Mariupol. A bustling port city of just under 450,000, nestled on the shores of the Sea of Azov. Mariupol is a diverse city, with Ukrainians, Russians, Greeks, Armenians, Jews and members of many other ethnic groups living side by side in peace. Regardless of ethnic origin, they’re all proud citizens of Ukraine – unwilling to be subjected to one man’s delusional dreams of conquest.

But in the span of just a few weeks, Russia’s marauding forces have besieged this peaceful city and laid waste to its tree-lined boulevards and apartment buildings. Ukrainian officials estimate as many as 2,500 civilians have died in Mariupol and 350,000 remain trapped without electricity, water, or heat. Heartbreaking aerial footage shows the utter devastation of Mariupol’s basic civilian infrastructure including residential buildings, supermarkets, hospitals, and municipal buildings. And just yesterday we saw the heartbreaking bombing of the Mariupol theater, where hundreds of people had taken shelter, including children. Indeed, the building was clearly marked as having children inside, but Russia bombed it anyway. It is impossible to find words to describe this cruelty and evil.

As I noted last week in this Council, Foreign Minister Lavrov actually, incredibly, had the audacity to publicly say that Russia had purposefully bombed this children’s and maternity hospital in Mariupol because – as he claimed – there were “nationalists” hiding inside of it.

Colleagues, I’m sure you’ve all seen the horrific image of a pregnant woman lying on a stretcher draped with a red blanket with black polka dots. She was photographed outside the smoldering ruins of that Mariupol children’s and maternity hospital. The surgeon who tried to save her life, Dr. Timur Marin, told the Associated Press that the woman’s pelvis had been crushed and her hip detached. Medics said that when she realized she was losing her baby she shouted, “Kill me now!” When it was clear to the attending medics that the child was stillborn, they tried to resuscitate the mother, but after 30 minutes they realized it was hopeless and stopped.

Last week the Russian representative in this Council expressed outrage at the sheer mention of civilian casualties at the Mariupol children’s and maternity hospital. His colleagues at the Russian Embassy in the UK went even a step further. They tweeted that the woman in that horrific and now viral photograph, and the countless other patients who were photographed or filmed at the hospital, were “crisis actors” who had been “made up” to look like victims.

Mr. Chair, what a sick disgrace. To try to justify the bombing of a children’s and maternity hospital. What abject debasement. But make no mistake, no amount of cynicism can whitewash the blood that stains the conscience of Russia’s representatives in this Council and everywhere.

Over the last few days, we have also seen reports of Russian forces holding hundreds of doctors and patients hostage in another hospital in Mariupol, the city’s largest. These are atrocities, pure and simple. As President Biden said, they’re an outrage to the world.

Mr. Chair, it appears that the Russian Federation has so completely lost touch with reality that its only recourse now is to attempt to eliminate all facts and replace them with fabricated falsehoods. Joseph Goebbels is alleged to have said that “If you tell a lie big enough and keep repeating it, people will eventually come to believe it.” Goebbels was wrong, of course. The truth will eventually percolate into Russian consciousness, as we saw with the brave actions of Marina Ovsyannikova at Channel One, who held up a handmade sign warning viewers that they were being told the Big Lie. I’m sure we will see more of these brave actions in the coming days as the truth inevitably gets out.

Now we hear the Kremlin spreading outright lies about alleged chemical and biological weapons activities in Ukraine. As Secretary Blinken clearly laid out for the UN Security Council last month, Russia is simply inventing false pretexts in an attempt to justify its own horrific actions in Ukraine; what I previously described in this Council as textbook “projection.” Because, in fact, it is Russia that has long maintained a biological and chemical weapons program, in violation of international law. It was Russian operatives who used the Novichok nerve agent. No one else. So, dear colleagues, we must all be vigilant because it is quite clear that Russia may be planning to use chemical and/or biological agents against the Ukrainian people.

Mr. Chair, this week marks the eighth anniversary of Moscow’s orchestrated, sham, so-called “referendum” in occupied Crimea. We see this playbook also being used again, with the deputy chief of the Kherson regional council reporting efforts by Russian forces to hold sham elections. No one will ever believe these lies. They will never stand. We will never countenance such fabrications.

So, here’s what we’re doing to support Ukraine in the face of this unprovoked war. Together with our Allies and partners, many of you here in the room, we’re going to stay the course. We’ll do everything we can to push for an end to this tragic, unnecessary war.

As President Biden put it yesterday, it is “a struggle that pits the appetites of an autocrat against humankind’s desire to be free.”

Yesterday President Biden announced an additional $800 million in security assistance in the form of direct transfers of equipment – to include 800 Stingers and 2,000 Javelin missiles — to the Ukrainian military to help them defend their country against Russia’s unprovoked and unjustified invasion. This brings U.S. security assistance to $1 billion in just the last week, and $2 billion since January 20-21. Our humanitarian assistance totals almost $300 million since the end of February, and we will support internally displaced Ukrainians and the more than three million refugees outside its borders as well.

Mr. Chair, I want to conclude with a quote from a different speech by Foreign Minister Lavrov, on March 10, in which he said: “We were told Ukraine was ours, and we will deal with and resolve the future of Ukraine.” To him I say, Ukraine is not yours. It does not belong to Russia or any other country; it belongs to the Ukrainian people. Ukraine is a sovereign nation, and it will not bend to foreign tyranny. We will support the forces of freedom, and we are confident they will ultimately prevail.

Thank you, Mr. Chair, and I request that this statement be attached to the Journal of the Day.

Please note the introductory comments and the parenthetical remarks are Mr. McConnell's and do not necessarily represent the views of the U.S.-Ukraine Foundation or the Friends of Ukraine Network.