As Mariupol is destroyed, NATO must make it clear to Putin that he will not win.

NATO must supply Ukraine with the arms it needs to defeat Russia. As Mariupol is destroyed, the stakes are higher than ever. 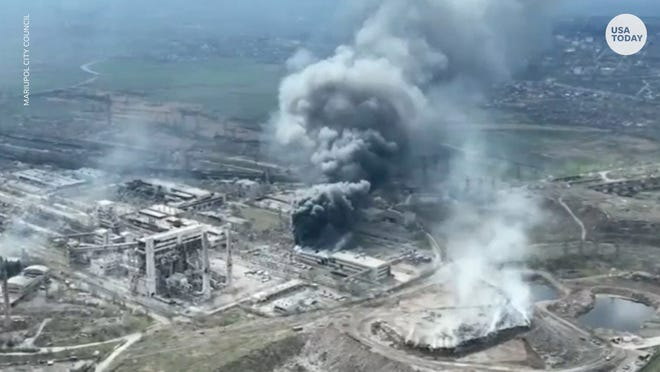 On the Good Friday of the Ukrainian Orthodox Easter, the heroic Ukrainian defenders of the besieged city of Mariupol, named for the Virgin Mary, have defeated eight weeks of repeated Russian attempts to seize and clear the city.

They have braved incredible hardship, fierce bombardment and repeated assaults. They have fought for their nationhood, their families, their lives and their future, as the city around them was destroyed.

Russian President Vladimir Putin has now decided to declare “victory,” and leave the thousands of defenders and 100,000 civilians to be isolated and starved. This ongoing battle for the city carries enormous significance both for Ukraine and the West.

If the city were to fall, Russia would have full control of the Ukrainian seacoast from Rostov in the east along the shores of the Sea of Azov and then on to the outskirts of Odessa. This would clear the path for easier logistics support for Russian forces in the south and further degrade Ukrainian efforts to defend Odessa.

The brave Ukrainian resistance cannot be maintained indefinitely in the absence of food, water and replenishment of ammunition, so the clock is ticking. Meanwhile, a substantial number of Russian forces are being freed up to move north, reinforcing Russian efforts to encircle and annihilate Ukrainian forces holding back the main Russian effort in Donbas.

The implications of the battle of Mariupol for both Russia and Ukraine are operationally significant, and for Ukraine the battle and 100,000 innocent lives hang in the balance.

Russia is sending a message to the West

At the strategic level, Russia is also sending a message to Ukraine and the West: whatever the problems in the north around Kyiv, Russia will use the means necessary, and suffer the losses required, to attain its objectives in Ukraine. A city of 400,000 has been deliberately erased through heavy and indiscriminate use of firepower and total disregard of international law and humanitarian conventions.

Humanitarian relief convoys were blocked; humanitarian exit corridors have been mined, areas of refuge deliberately targeted, and nominally agreed civilian evacuations often fired upon, all part of a psychological campaign of terror.

In taking over areas of the city, Russia has shown it will execute a ruthless campaign of “filtration,” abducting the civilian population to “filter” out and murder potential opponents and forcibly resettle others into Russia or perhaps sell thousands of young women into human trafficking.  A mass grave site is now seen in satellite imagery.

Here are some larger efforts that failed thus far to stop the war and save the city: United Nations General Assembly votes to condemn Russia, multiple investigations of potential Russian war crimes, and heavy and escalating economic sanctions on Russia.

Not even Russia’s initial failures around Kyiv, poor Russian morale in some units, Russian intelligence failures, visits by Western leaders to Kyiv and appeals to Putin himself have convinced the Russian leader to negotiate an end the conflict and release his nation's grip on Mariupol.

The messages to the West should be clear. First, the outcome in Ukraine will be determined largely by “the facts on the ground.”  Modulating Western military assistance to suit Putin flirts with strategic failure. Ukraine must be given the armaments necessary not only to resist but actually to defeat the Russian invasion, or there will be more Mariupols.

Second, despite escalating sanctions, time is not always on the side of Ukraine and the West – Putin has shown a Stalinesque capacity to shrug off defeats and disloyalty, while Ukraine’s fierce spirit of resistance is under daily assault. Russian losses around Kyiv have not prevented Putin from throwing more forces into the battles in Donbas.

Russia’s war industries are far more robust, particularly with the prospect of covert Chinese support, than Ukraine’s and are operating from sanctuary, while Russia is tightening down Ukraine’s lifelines to the West.

And as the West has escalated sanctions, with increasing difficulty, Putin has ramped up his threats against the West. These threats have deterred the West from providing Ukraine sufficient, timely military support to compel Russia to negotiate.

In fact, Western worries and warnings about Putin’s redlines and the possibility that he will escalate to the use of nuclear weapons have fed into Putin’s sophisticated psychological campaign against NATO and the United States, rather than rallying opposition to Russia and Putin’s aims.

What needs to happen now in Ukraine

Third, the West’s ambivalence in responding to Russian threats is weakening American credibility on a global scale, as leaders in the Mideast, Asia and Africa hedge their bets on the outcome of the struggle in Ukraine, refusing to assist and support the United States.

Never forget that Putin’s initial, announced aims went beyond Ukraine to roll-back NATO membership for eastern Europe, and by doing so set the conditions for NATO’s eventual collapse. And with that would go seven decades of American leadership in Europe – weakening our ability to manage peacefully the ascent of China.

NATO’s self-imposed redlines against support to Ukraine contradict almost 30 years of NATO leadership in providing regional stability to Europe. This is eroding confidence in NATO itself – and the world sees this.

Make no mistake: the West is not yet winning against Putin’s attack on NATO and the rules-based international order.

The overriding lesson is that Western policy, led, by the United States must be more proactive than reactionary, and more grounded in shorter-term military than in longer-term economic measures.

If we seek the surest and most rapid end to this tragic struggle at the negotiating table, now is the time to tell Putin, “You will not win,” and to provide Ukraine the means to relieve the siege of Mariupol and make Putin’s military defeat in Ukraine a reality.

Retired Gen. Wesley Clark is a former NATO Supreme Allied Commander, Europe and a Senior Fellow at the UCLA Burkle Center. Follow him on Twitter @GeneralClark.