OSCE Moscow Mechanism covering the initial period of the Russian Federation’s renewed aggression against Ukraine from February 24 through April 1, 2022 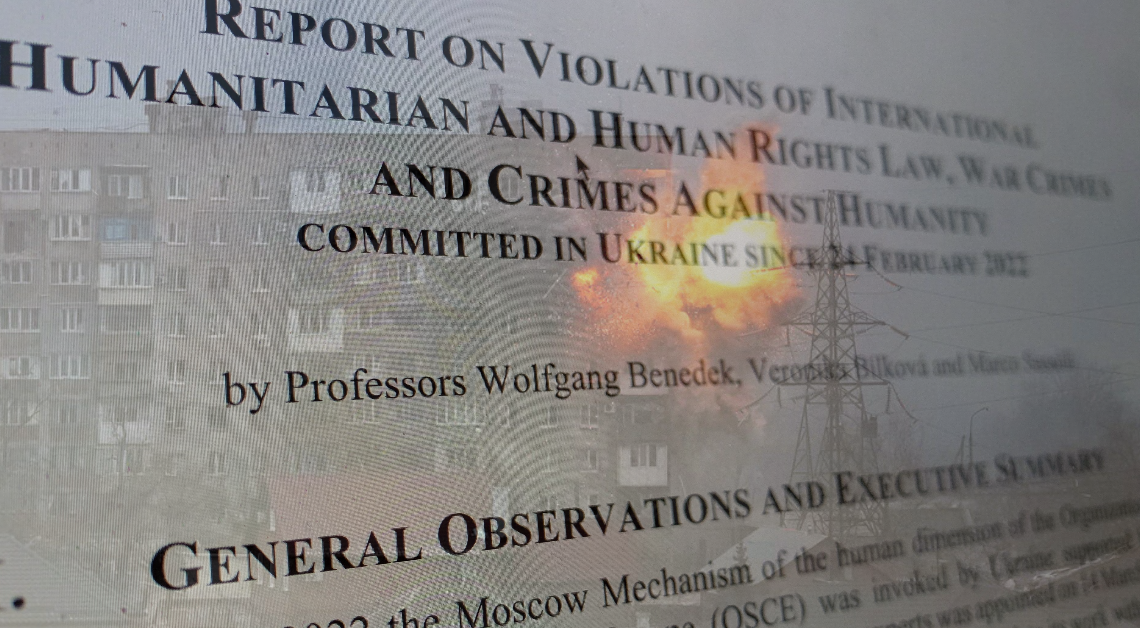 The Friends of Ukraine Network intends to do its part to have the reports of the United States to the OSCE meetings spread broadly as possible - to people in our government and the public. In today's report Ambassador Michael Carpenter speaks on the OSCE's documentation of the evil brutality of Putin's war of choice in Ukraine.

As delivered by Ambassador Michael Carpenter to the Permanent Council, Vienna. April 13, 2022.

And I too fully align myself with the statement just made by my distinguished colleague, the Ambassador of Romania, on behalf of the states invoking the Moscow Mechanism.

I’d like to start by thanking Professors Wolfgang Benedek, Veronika Bílková and Marco Sassòli for their meticulous and well-documented report produced under the OSCE’s Moscow Mechanism – covering the initial period of the Russian Federation’s renewed aggression against Ukraine from February 24 through April 1, 2022. I’d also like to thank ODIHR for its support to the Mission. While operating under intense time constraints, the mission produced a thorough and compelling account of what it found to be Russia’s violations and abuses of human rights, and its violations of international humanitarian law. In several places, the report details instances in which war crimes and crimes against humanity may have been committed.

Taken as a whole, the report documents the catalog of inhumanity perpetrated by Russia’s forces in Ukraine. This includes evidence of direct targeting of civilians, attacks on medical facilities, rape, executions, looting, and forced deportation of civilians to Russia. The mission found “clear patterns of international humanitarian law violations by Russian forces” and, as Professor Sassòli just explained, it is “not conceivable that so many civilians would have been killed and injured and so many civilian objects…would have been damaged or destroyed if Russia had respected its international humanitarian law obligations in terms of distinction, proportionality and precautions” (page 93).

The report documents many particularly egregious attacks, such as the March 9 attack striking the Mariupol Maternity House and Children’s Hospital, determining that the hospital was destroyed by a Russian strike. The mission concluded that this attack was deliberate, with no effective warning given, and thus constitutes a “clear violation of IHL” –international humanitarian law — and “a war crime” (page 47). While the Russian government alleged the hospital was used for military purposes, the mission categorically dismissed these claims.

Similarly, the mission found that the March 16 attack on the drama theater in Mariupol that killed approximately 300 people was most likely an egregious violation of international humanitarian law and those who ordered or executed it committed a war crime. The mission also dismissed the Kremlin’s attempt to blame Ukraine for this and other attacks (p 47-48).

The report is powerful in documenting the sheer scope of the Russian government’s cruelty. For instance, it chronicles how Russia’s forces used the Red Cross emblem, white flags, Ukrainian flags, civilian clothes, and even OSCE symbols to facilitate their military operations (page 43). It documents cases of Russia’s forces arresting civilians, including journalists, without any procedure, and ill-treating them by methods that amount to torture. One case involved a Ukrainian interpreter and fixer for Radio France who was held in captivity in central Ukraine for nine days. As the report notes: “Left in an icy cellar, he was repeatedly beaten with an iron bar and rifle butts, tortured with electricity, deprived of food for 48 hours and subjected to mock execution” (p.18).

The report also cites evidence showing that Russia’s forces engaged in a “widespread and systematic pattern” of damage to Ukrainian healthcare facilities with attacks on 52 facilities just between February 24 and March 22 by “indiscriminate bombardment and in some cases intentional targeting,” which constitute war crimes (page 36-37).

It demonstrates how Russia’s forces opened fire on peaceful protesters in Skadovsk on March 16. It documents 24 cases of wrongful detention and disappearance of local officials in regions held by Russia’s forces, as well as the wrongful detention and disappearance of 21 journalists and civil society activists. It documents pillage conducted by Russia’s soldiers, which “constitutes a violation of [International Humanitarian Law] and a war crime.” (p. 23) It documents those who have been forcibly displaced, as well as the unlawful conscription of Ukrainian nationals in Donetsk and Luhansk. It also discusses how on March 7, Yuriy Prylypko, the head of the local self-government in the village of Hostomel, and two volunteers, Ruslan Karpenko and Ivan Zorya, were shot dead by Russia’s soldiers while delivering food and medicine to local residents. It goes on: “On 13 March 2022, Oleksander Kononov, a disabled pro-Ukrainian activist from the Luhansk region, was shot dead at home, in his wheelchair, by Russian soldiers.” In its understated way, the report concludes: “These incidents seem hard to explain by military necessity.” Indeed, I would go a step further: this entire war has been unnecessary. This is a war of choice, a war of cruelty, and a war of monstrous barbarity.

Mr. Chair, as we all know, Russia’s atrocities continue even after this report’s conclusion. Since the mission completed its report, the world has been horrified by the scenes of large-scale civilian killings at the hands of Russia’s forces in Bucha, Irpin, and other areas that Ukraine has liberated. Ukrainian authorities reported on April 10 that more than 1,200 bodies have been discovered in the Kyiv region alone following the retreat of Russia’s troops from the area. Ukrainian authorities also continue to report appalling cases of sexual violence committed by Russia’s troops against women and children in the Kyiv region and elsewhere. In the mere eight days since this report was submitted, the world has additionally borne witness to Russia’s barbaric missile attack hitting Kramatorsk’s railway station on April 8 that killed at this point 57 civilians and injured scores more. There have also been reports that Russia’s forces in Mariupol have deployed mobile crematoria, as I noted the other day, in an attempt to cover up atrocities and are conducting forced deportations and transfers of Ukrainian civilians from Mariupol and other areas it has taken control of since February 24. Who but Russia would think to use mobile crematoria? The destruction of whole cities and killings of civilians are ongoing in Mariupol, Kharkiv, Izium, and other cities and towns due to Russia’s relentless air strikes, mortaring, and shelling of these areas.

Currently we are looking into reports that Russia’s forces used chemicals in an attack in Mariupol. There has been credible information that Russia’s forces may have used a variety of riot control agents, including tear gas mixed with chemical agents that would cause stronger symptoms, to weaken and incapacitate entrenched Ukrainian fighters and civilians as part of its aggressive campaign to take Mariupol. This is a scenario we have been concerned about for some time and repeatedly warned the world about. We must now urgently gather the evidence to ensure there is accountability for what could well be another war crime in Ukraine.

Mr. Chair, the key aim of the Moscow Mechanism in this instance was to promote accountability for human rights abuses, violations of international humanitarian law, war crimes, and crimes against humanity. It is critical that, consistent with the mission’s mandate, all the information collected in this report be made available to the relevant accountability mechanisms, as well as national, regional, and/or international courts or tribunals that have, or may in the future have, jurisdiction. I note that the report contains language suggesting that new accountability mechanisms could be created, and you referred to this Professor Benedek. I am curious to hear if you have any specific recommendations. Unfortunately, many more atrocities are likely to come to light in the coming days and weeks, and participating States around this table must be prepared to keep using the tools at our disposal to keep documenting, collecting evidence, and building cases for future accountability.

Mr. Chair, we must do everything possible to ensure that every single responsible individual is held accountable. The United States will continue to use the full range of its tools and resources to support documentation and accountability efforts, together with our allies and partners. We owe it to the victims and to the broader cause of humanity.